Where some players might feel pressure at contesting a Grand Slam final on home soil, Ash Barty instead recognises the enormous privilege at Australian Open 2022. 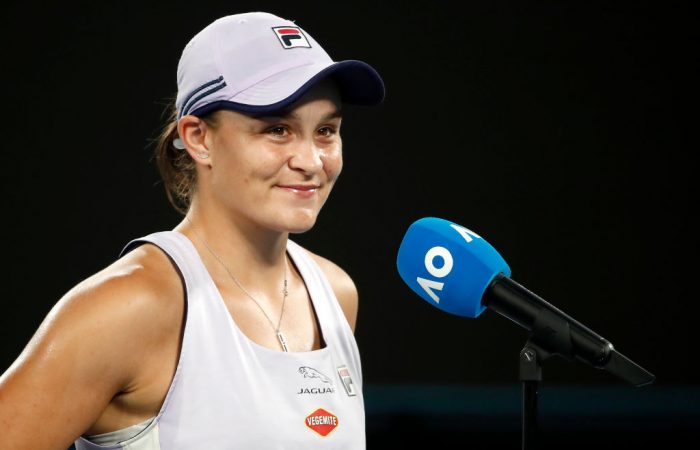 As astute off the court as she is sharp on it, the always-respectful Ash Barty also holds a keen appreciation for tennis history.

“I love Kooyong. I’m a Kooyong girl,” beamed the world No.1 of the iconic venue that hosted the Australian Open from 1972 until the move to Melbourne Park in 1988.

“I can just imagine what it would have been like, the way that the stadium is set up. I’ve said a couple of times I wish I was maybe born in a different era and I got to experience playing on grass courts all year long. It would have been incredible.”

And yet the quest for a first Grand Slam title on hard court – and more momentously, a first on home soil after victories at Roland Garros and Wimbledon – is a matter of staying present for the world No.1.

Unquestionably dialled in on the court as she’s torn through the AO 2022 draw to become the first Australian women’s finalist since Wendy Turnbull 42 years ago, Barty has been equally efficient with her off-court time.

Not a speck of energy is wasted on any pressure she feels to become the player who finally ends the nation’s 44-year drought for a local champion.

Nor does the 25-year-old spend any unnecessary hours on the practice court.

The famously down-to-earth Barty is instead more likely to switch off with some quiet reading, watching the Women’s Ashes or indulging her love for quality coffee.

“When I’m not here, I don’t really think about the tennis too much, said Barty after her semifinal victory over Madison Keys.

“I’m able to switch off when I’m not here on-site and that makes the time when we are on-site more enjoyable, more special, and then we switch on and get ready to go.”

Which is not to say that the Queenslander hasn’t long dreamed of lifting the trophy at her home Grand Slam. The Australian Open, after all, was where Barty first glimpsed the commitment required to become a major champion.

“I would have only been 11 or 12 years old and came down for a training camp in the second week. To see how professional it was and to see everyone going about their business was really eye-opening,” she reflected.

So while others speak of the pressures that Barty might experience in her maiden Australian Open final, the world No.1 instead recognises the enormous privilege.

“To be in the finals weekend of your home Grand Slam is what a lot of Aussie players dream of,” said Barty. “I can’t wait to go out there and enjoy it.”

The No.1 seed can do so with a reassuring sense of accomplishment. Riding a 10-match win streak after starting her season with a 14th singles title in Adelaide, Barty is in particularly sparkling form in Melbourne.

Already the Queenslander has bettered her performance in her eight previous campaigns and with not a single set dropped, she’s embracing every moment.

“Over the last three or four years I’ve loved playing here in Australia. I’ve had my best results here over the last little period,” said Barty.

“It’s really exciting now that we get to play for a title on a Saturday at your home Slam.”

It’s clearly not Kooyong, but as she embraces every moment of her most successful Australian Open, the accomplished Barty is creating her own piece of history.