While a magical run ended in the AO 2022 semifinals, Charlotte Kempenaers-Pocz built a solid foundation for the year ahead. 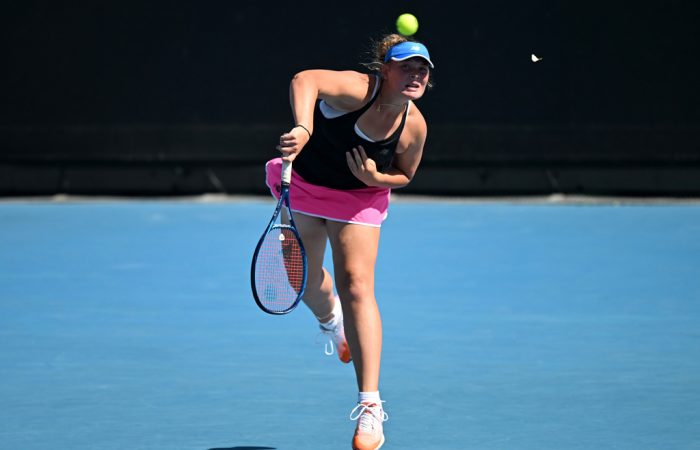 Charlotte Kempenaers-Pocz’ golden run in the Australian Open 2022 girls’ championships has ended in the semifinals.

In her first match inside Margaret Court Arena, Kempenaers-Pocz battled hard but Belgian No.8 seed Sofia Costoulas claimed the 6-4 6-1 win.

Across singles and doubles, the 17-year-old Kempenaers-Pocz won seven matches this week in a tournament that will significantly lift her current junior ranking of world No.215.

This will in turn open the door for main draw entries to the remaining three junior Slams this year.

“I’ve tried to play as many matches as I can in the last year,” Kempenaers-Pocz said this week.

“I’ve played state league, ITF, I also got to play main draw qualifiers for the Australian Open. I want to get as many matches as possible.”

> READ: Getting to know Charlotte Kempenaers-Pocz

In the first set it was the Belgian who landed the early blow, breaking serve in the third and fifth games to race to a 4-1 lead.

Kempenaers-Pocz battled back into the contest well, but Costoulas took the set 6-4 in 47 minutes.

The aggression that served Kempenaers-Pocz so well in a dominant quarterfinal win didn’t quite produce the same balance today.

The Australian smashed 16 winners in the first set, but also produced 21 unforced errors to just six in a largely wayward opener.

In the second set it was a similar story, as she struck five winners to nine and 11 unforced errors to seven.

In the end Costoulas was rock solid in her progress to tomorrow’s final, where she will look to become the first Belgian to win a junior girls slam since An-Sophie Mestach lifted the Australian Open trophy in 2011.

Kempenears-Pocz achieved a milestone of her own this week as she was the first Australian male or female to reach the singles semifinals of a junior Grand Slam since 2016.

“I’ve just been really happy to be playing in a home Slam in front of home fans and playing some good tennis,” said Kempenaers-Pocz.

“It’s been an absolute dream.”