Getting to know: Charlotte Kempenaers-Pocz

With a powerful game and fierce competitive spirit, AO 2022 girls' semifinalist Charlotte Kempenaers-Pocz plans for a big future in tennis. 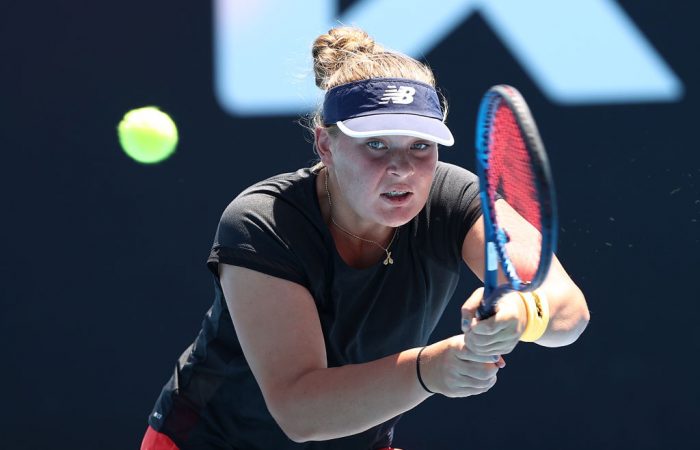 As a five-year-old girl growing up in Glengowrie, South Australia, Charlottte Kempenaers-Pocz’ start in tennis was first sparked by the simple desire to beat her older brother. That competitive spirit has since taken the 17-year-old far. The South Australian has contested qualifying events at the 2021 Melbourne Summer Series and 2022 Adelaide International, and combined with former world No.1 Simona Halep to contest the AO 2021 women’s doubles.  Kempenaers-Pocz has twice competed in Australian Open qualifying. We caught up with the teenager as she utilised her powerful serve and groundstrokes in a spectacular path to the semifinals of the Australian Open 2022 girls’ singles tournament.

Tell us about your local tennis club

I am at Seacliff Tennis Club now, but I was at Flagstaff Hill (in the Glenelg district) as well.

What are some of your career highlights?

I got to play nationals when I was a junior, and I represented Australia in the Czech Republic and Thailand in Under 14s. I also went to Dubai last year to try and qualify for the Australian Open.

Who has had the biggest influence on your tennis career?

That’s a good question. Probably my parents, they’ve always been so helpful and supportive. Backing me to do whatever I can and always being there to help make that happen for me.

What’s been your best moment on a tennis court?

I played in the Adelaide International at the start of the year, and that’s my hometown. I was fortunate enough to win my first qualifying match, so I would say that has been my favourite memory.

Who was your favourite player growing up?

I kind of chopped and changed, depending on the time, but I think Ash Barty is a great role model for all junior Aussie tennis players.

If you could take another stroke or quality from a pro player, what would it be?

I would love Ash Barty’s craftiness. I think that would be really cool.

Winning the Australian Open. When I was nine (years old) it was Wimbledon, but probably here in Australia.

I like to hang out with my school friends and just get away from tennis for a bit and hang out. I find that really refreshing.

What are your goals for the year ahead?

I really want to build my ITF ranking up and hopefully play all the junior slams throughout the year and to make sure I stay fit and keep loving the sport.

To learn more about Charlotte Kempenaers-Pocz, visit her player profile on tennis.com.au.