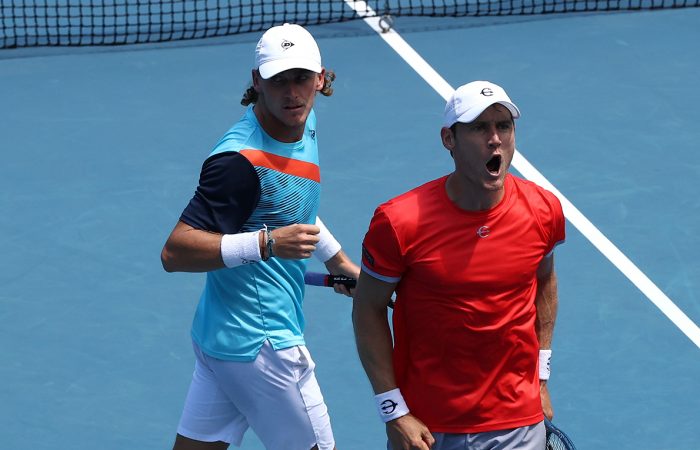 Max Purcell and Matt Ebden are one win away from claiming their maiden Grand Slam men’s doubles title.

The Aussie duo continued their magical Australian Open 2022 run today, recording a 6-3 7-6(9) victory against No.2 seeds Rajeev Ram and Joe Salisbury in a semifinal showdown at Margaret Court Arena. It is their fourth consecutive win against a seeded team.

World No.3 Salisbury, a 29-year-old Brit, and world No.4 Ram, a 37-year-old American, were the Australian Open 2020 champions and had been aiming to reach a third consecutive final at Melbourne Park. But the Aussies spoiled those plans, securing their straight-sets victory in 93 minutes.

“It was a super tough match,” Ebden said. “Those guys are arguably the best, if not the second best, team probably in the last year or two consistency-wise.”

Purcell and Ebden made a brilliant start, securing two breaks to snare the opening set in 31 minutes. They hit 13 winners to six and lost only three points on serve, heaping the pressure on their highly credentialled opponents.

The second set was a tighter affair, with a tiebreak needed after neither team dropped serve.

“They definitely lifted their level in the second set,” Purcell said. “But credit to us, we hung in there at the end. I helped Matty out a little bit when I need to, and he helped me out when he needed to, and we got through.”

Purcell and Ebden fought back from a 4-6 deficit in a tense tiebreak, then saved a third set point at 6-7 and a fourth at 7-8.

These steely efforts were rewarded, with the Aussies earning a match point at 9-8. But they were unable to convert.

They didn’t miss their second opportunity though, with Purcell sealing an incredible win with a volley winner.

Remarkably, this is only Purcell and Ebden’s second tournament together. They now boast a 8-1 win-loss record as a team, with their only loss against eventual champions Ram and Salisbury in last year’s US Open quarterfinals. They held four match points in that contest too.

“To go through to the finals here is a dream,” Ebden said. “It’s our home Grand Slam and we want to be playing Grand Slam finals and winning as many as we can.”

Purcell has progressed to his second major final, with the 23-year-old having previously made the Australian Open 2020 championship match alongside fellow Aussie Luke Saville.

“It’s awesome to have two Aussie teams playing off in the final. What could be better really?” Ebden said.

The last time two all-Australian teams met in an Australian Open men’s doubles final was in 1980, when Mark Edmondson combined with Kim Warrick to defeat Peter McNamara and Paul McNamee.