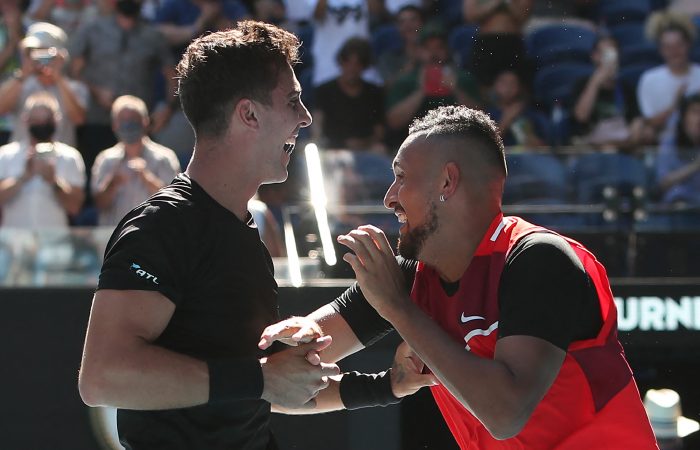 The excitement machines have swept all before them this year and in front of a raucous and energetic home crowd, they dismantled the third seeds Marcel Granollers and Horacio Zeballos 7-6 (4) 6-4 in one hour and 47 minutes.

“I’ve played a lot of singles matches around the globe, but this week with Thanasi in front of these crowds, nothing beats this,” Kyrgios said on court after the match.

The first set was dominated on serve, with neither pair creating any break point chances.

In the tiebreak, it was the Australian’s power on big points that was crucial, striking three return winners in the breaker to land a crucial blow against the more experienced pair.

In the second set, Kokkinakis and Kyrgios secured the early break, via a Kokkinakis forehand cross court winner for a 2-0 lead.

The third seeds found a way back with a break of their own, with Kyrgios getting agitated at three consecutive let calls on unreturnable first serves, which he believed were down to faulty equipment.

With the match at a crucial stage, Kokkinakis produced a stunning 10-minute burst of tennis, blasting five winners, including three in four points to secure the break and with it the match in the 10th game of the second set.

“When we come out here the crowd really keeps us going, we worry about the tennis second. I don’t know if we’d have this result anywhere else,” Kokkinakis reflected post-match.

The special Ks served 13 aces to four, struck 32 winners to 21 and won 79 per cent of points on their first serve.

Neither Kyrgios nor Kokkinakis had ever progressed past the third round of a doubles draw at Grand Slam level before this event.

Having played their previous matches on Kia Arena, this clash was at Rod Laver Arena with the venue open to ground pass holders who got more than their money’s worth.

“I think both of us bring a different type of charisma and energy, and having fun brings out the best in us. I think we are unpredictable and that’s why they enjoy it,” Kokkinakis said.

The pair will now take on fellow Australian’s Matthew Ebden and Max Purcell in the first all-Australian men’s doubles final at the Australian Open since 1980, when Mark Edmondson and Kim Warwick defeated Peter McNamara and Paul McNamee.

“They are both good doubles players and they are obviously playing well, I’m looking forward to it. It’s great to see so many Aussies doing well this week,” Kyrgios said, looking ahead to Saturday’s final.

With so much attention and hype around this doubles’ final, Kyrgios spoke about his desire to attract a new generation of tennis fans.

“My goal is to only bring new fans who might not be following tennis, to watch tennis,” he said. “If they watch Thanasi and I play, but know nothing about tennis, they’ll want to watch next time and that’s what I want to bring.”