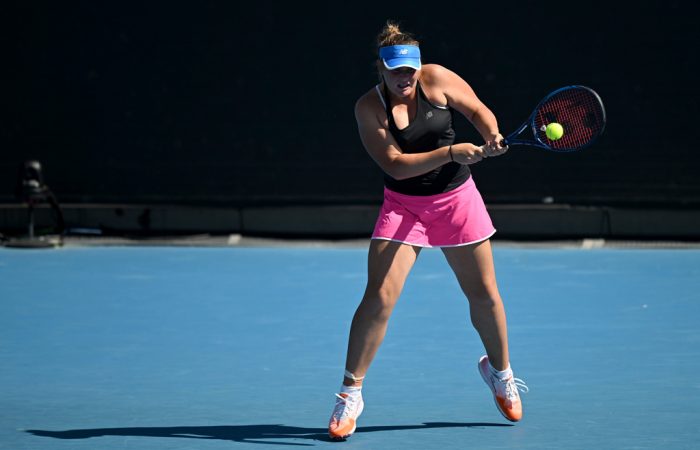 Charlotte Kempenaers-Pocz has continued her magical run at Australian Open 2022, progressing to the girls’ singles quarterfinals after an epic third-round victory today.

The first set was completely dominated by the server, and unsurprisingly a tiebreak was required to split the two combatants.

Leading into that breaker, 50 points had been won by the server, and just 13 by the receiver, including only three points against the first serve of either player.

In the tiebreak it was the Australian who maintained the level, landing two crucial points against the serve to set up a 6-1 lead, closing it out with an unreturnable serve down the middle.

Kempenaers-Pocz sent down five aces to one in the first set and struck nine winners to six as she outhit her opponent on the crucial points.

The second set saw a complete change in direction, with Kempenaers-Pocz’s serving level dropping to the extent where she won no points on second serve, and only 50 per cent of points on first.

She also made 12 unforced errors to four and struck only three winners as she dropped the set in 26 minutes.

The third set saw the status quo resume, with both players holding serve until at 4-4, Kempenaers-Pocz faced three break points.

The South Australian teenager battled through to force another tiebreak, and just as she did in the first, she was able to dominate. She claimed nine of the last 12 points to secure the victory.

In such an even contest, her ability to produce 17 points to eight in the two tiebreaks was enormous, and will provide confidence ahead of a quarterfinal meeting with Germany’s Carolina Kuhl.

There was a further milestone in the girls’ doubles, as Kempenaers-Pocz combined superbly with fellow Australian Taylah Preston to reach the semifinaks.

With victory over Japanese pair Mao Mushika and Mio Mushika, Kempenaers-Pocz and Preston set up a meeting with No.1 seeds Clervie Ngounoue and Diana Schnaider, from the United States and Russia respectively.

Meanwhile the run of 15-year-old Hayden Jones ended with a straight-sets loss to No.4 seed Jakub Mensik.

The Czech served brilliantly and played terrific ground strokes on both sides – belting 14 winners to two – to claim the first set 6-2.

Unable to find range on his own serve until then, Jones lifted in the second, creating the first break point chance of the set.

Mensik saved that chance with an ace, before breaking in the very next game with his only opportunity of the set.

Jones lifted his serve percentage from 55 to 79 in the second set, but the Czech just kept coming up with winners, striking another 14 as he was simply too strong on the day.

As one of the youngest players in the draw, Queenslander Jones had showed encouraging promise in his third-round run.