John Peers is thriving in his home Grand Slam, with the Australian advancing to the mixed doubles semifinals with China’s Zhang Shuai. 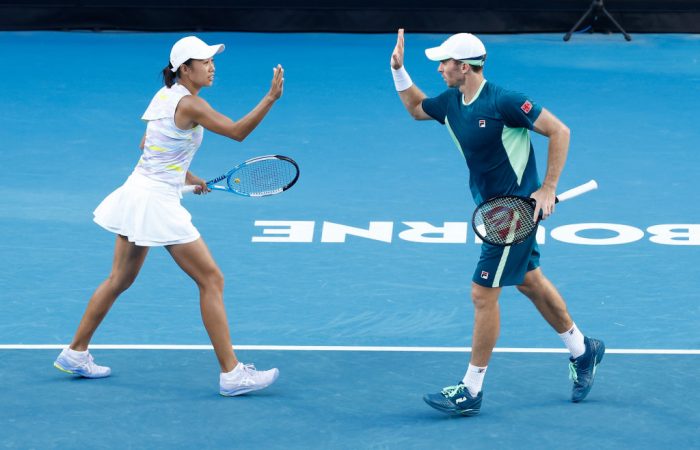 John Peers is producing some of his best tennis in his home city, with the 33-year-old today advancing to the mixed doubles semifinal with China’s Zhang Shuai.

Zhang and Peers are the No.2 seeds in the AO 2022 mixed doubles tournament and they validating that seeding as they claimed a 6-4 6-4 win over Japanese duo Ena Shibahara and Ben McLachlan.

Combining superbly on Kia Arena, Peers and Zhang were solid from start to finish of their 69-minute quarterfinal victory.

With a break of Shibahara’s serve in the third game of the third set, they maintained their lead to take the set 6-4.

The second set followed a similar pattern, with a break of serve on the Shibahara serve allowing the Chinese-Australian duo to edge ahead in the third game.

Zhang consolidated and with confidence growing, they were able to stave off any hint of a challenge from the Japanese pair.

“We played pretty well today, got a break early each set, which was nice and then just kept holding serve,” said a smiling Peers, as they thanked the Kia Arena crowd for their support.

Zhang and Peers produced 27 winners compared to 15 from Shibahara and McLachlan. Some strong serving was particularly helpful, with eight aces all  coming from Peers’ racquet – three of them consecutively in the sixth game of the second set.

Victory sets up a semifinal with either No.5 seeds Kristina Mladenovic and Ivan Dodig, or New Zealand pair Erin Routliffe and Michael Venus.

As mixed doubles semifinalists at Wimbledon and the US Open, Zhang and Peers take valuable experience into their next match.

“We have fun together out on court and that’s why we keep playing together. We think we’re a great chance of taking the title,” Peers smiled.

It completed an impressive day for local players in mixed doubles, with Jaimee Fourlis and Jason Kubler earlier securing a semifinal appearance in their first tournament as a team.