Dylan Alcott earns the chance to end his career on the ultimate high note as he progresses to an eighth Australian Open quad wheelchair singles final. 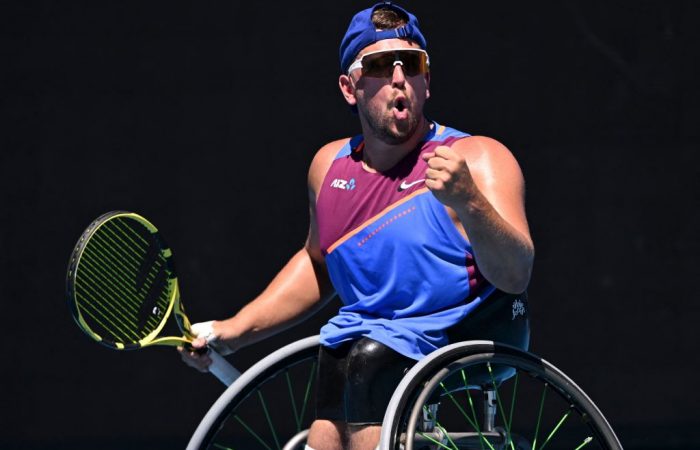 Dylan Alcott will have the chance to end his career on the ultimate high note when he contests the Australian Open quad wheelchair singles final on Thursday.

The world No.1 Australian defeated Great Britain’s Andy Lapthorne 6-3 6-0 in the semifinal at Melbourne Park today to book his appearance in a 17th Grand Slam singles final.

There’s also another title on the line for Alcott, a finalist for Australian of the Year. Adding to a momentous 24 hours for the Australian, he’ll fly to Canberra this afternoon to attend tonight’s awards ceremony.

“I talked to my team. I was like, ‘Look, if by the very odd chance you have a win, you cannot do that on Zoom’.

“So many people with disability should have won that award over the years but haven’t,” related the busy Alcott, who has juggled his final Australian Open appearance with commentary duties this week.

“I love getting amongst life and having a crack.”

Even so, efficient progress against Lapthorne was welcome. After a tough opening round in Melbourne, when he required two hours and 44 minutes to complete a come-from-behind win over Niels Vink, Alcott enjoyed a far smoother progression today.

Alcott was the clear aggressor throughout the 69-minute encounter against Lapthorne, with the Australian maintaining focus throughout a tight first set before running away with the second.

The lone blip for Alcott came in the first set, as he worked hard to consolidate a service break against the Brit in the sixth game. With four errors and a double fault, he surrendered that early lead.

But the 15-time Grand Slam singles champion quickly recovered, immediately gaining another break of serve and holding a set point in the eighth game.

While Alcott couldn’t claim that one, he saved two break points in the following game to take a 6-3 lead.

Lapthorne had battled to create some opportunities and after saving set point with some stunning court coverage, implored the Kia Arena crowd to urge him on.

But with so much to play for in his final Australian Open, Alcott was ultimately unstoppable at his home Grand Slam.

After seizing another break of serve to open the second set, the 31-year-old never looked back. He secured the victory after forcing Lapthorne into error on his third match point.

The winner count told the story for Alcott, who claimed 21 to Lapthorne’s seven. Winning 74 per cent of his first serve points, the Australian could also rely on his serve.

He’ll need more of that dominance against No.2 seed Sam Schroder in Thursday’s final, with the Dutchman overcoming Heath Davidson 6-1 6-2 in today’s other quad wheelchair singles semifinal.

The 34-year-old Davidson  – a close friend of Alcott – was contesting a first Grand Slam singles semifinal after defeating Koji Sugeno of Japan on Sunday.

Davidson held serve in the opening game before Schroder took control, with the 2020 US Open champion taking the opening set 6-1.

Schroeder struck 15 winners to six, with Davidson holding his own in all other areas of the contest.

Thursday’s final will also be a fourth Grand Slam decider for Alcott and Schroder, as well as the Australian’s final match of his career.

“I am gutted my best mate Heath didn’t win today. That would have been fairytale, fairytale stuff. Playing on Rod Laver Arena together,” Alcott admitted.

“But Sam, he is a legend. He is the Next Gen. The current gen, to be honest. He’s going to take the reins hopefully after Thursday, hopefully not before Thursday. What a way to go out?

“All I want it to be is a great match, a great showcase, and enjoy it. I think we’ll put on a show.”