As he prepares to contest the AO 2022 semifinals, Dylan Alcott is embracing the challenges of his final matches on tour. 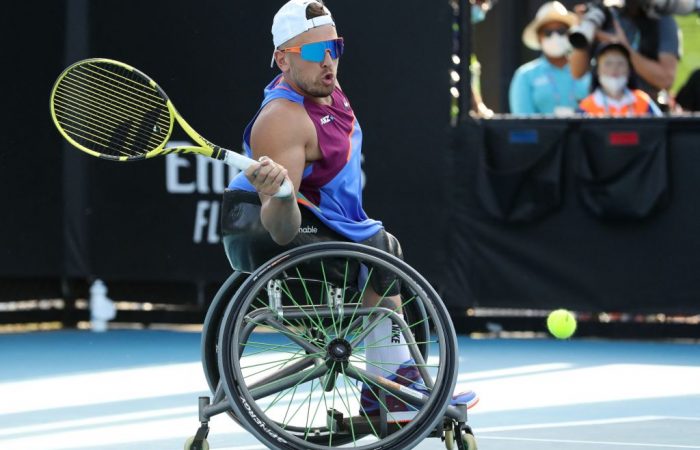 Dylan Alcott is powering towards the finish line of his playing career, but his impact on tennis will stretch far beyond the final point this week.

While future generations will be inspired by Alcott’s s remarkable exploits, the man himself has opened up about the demons he has had to overcome, even at the very height of his powers.

As the world rejoiced at Alcott’s Golden Slam in 2021, the aftermath was very different for the man himself, whose quiet struggles served as fuel for one last effort.

“I can’t tell you how much I struggled after the Golden Slam,” Alcott admitted after his hard-fought AO 2022 quarterfinal win over Niels Vink.

“I had actual depression, I hadn’t seen my family, it was the biggest moment of my life, and I’m in a hotel.

“I was watching my good mate Max Gawn (Melbourne Football Club captain) kick on and party after the premiership. And I was still in quarantine.

“ I’m normally the positive guy but it was really hard. I’m not saying it shouldn’t have happened I’m just being honest.”

Alcott admits he faced a crossroad in his life and career and had to decide whether to push forward or move on.

“So I went, I can do two things. I can dial it in this Australian Open, go out every weekend and half-ass it and lose, or – because I can see the finish line – I can go all in, all in, 11 sessions a week, every day, no break, let’s do it, and I did.

“I needed to do it for my mental health, so I just went straight back to the gym. Best decision I ever made because I really enjoyed it.

“I’m really glad that I did, and I look great, if I say so myself. That’s why I’m wearing no sleeves this year. Shout out to Nike looking after me.” Alcott joked.

The seven-time Australian Open champion changed his fitness and diet regime, which is helping the veteran continue to compete with youngsters like quarterfinal opponent Vink.

“I used to eat not much, because I wanted to look ripped and skinny, and that probably wasn’t good for your tennis. With nutrition I’m working with a new guy called The Fight Dietitian (Jordan Sullivan), who does Israel Adesanya and Australia’s Alexander Volkanovski actually — that’s because I’m going to go on UFC and beat some people up next.”

With his quarterfinal clash in the balance, Alcott dug deep and credits his hard work with getting him through that challenge in the heat.

“Did you see me vomiting up pickle juice? I was on the pickle juice early in the third set. Whoever invented that, they need a raise. I was cramping and I was in trouble. But I’m fit, I’m strong, I look good, and I knew that I had done the work so I knew I could last.

“I thought they were about put on the retirement video. To fight on and get through to the semifinal now is pretty cool.”

Part of Alcott’s drive is to embrace the moment, which is exactly what he did through his amazing 2021 run to the Golden Slam.

“In the golden slam I kept saying ‘It’s just another match, but I kind of lent into that a bit. So I’m going to lean into this as well from now on and embrace what it is.”

Alcott’s 6-7 6-4 6-2 win over 19-year-old Vink was a huge victory, with the youngster seemingly destined to carry the torch of wheelchair tennis into the next generation.

“I see a lot of myself in him. Best thing about him is he’s a good person, first and foremost. Good kid, good family, always humble in victory or defeat. A trait that I put a lot of worth into.”

As the curtain is about to come down on one of the great sporting careers, Alcott is constantly reminded how much wheelchair tennis has grown throughout his journey.

“People from overseas sent me a message, they get to Melbourne airport, what do they see? Bang. Billboard of a wheelchair tennis player.

“It just feels normal here, and I want every other sport and all around the world to have athletes with disability competing, putting on a show, but make it feel normal. That was normal and come Thursday you don’t need me anymore.”