World No.1 Ash Barty has matched her best result at the Australian Open, advancing to the women's singles semifinals for the second time in her career. 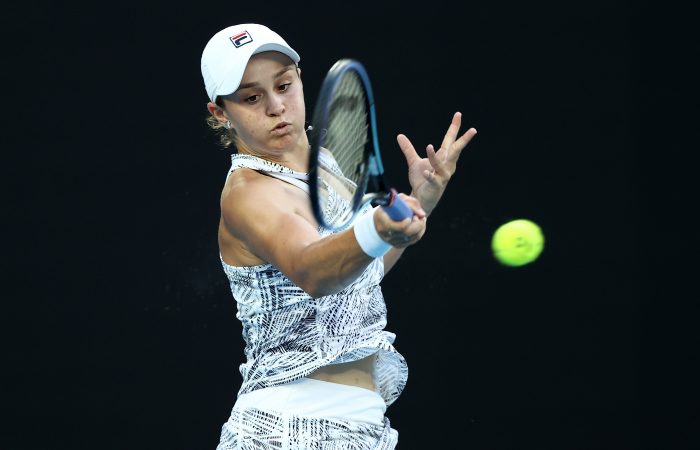 Ash Barty’s swift progression through the Australian Open 2022 women’s singles draw has continued, with the world No.1 needing only 63 minutes to overcome world No.21 Jessica Pegula in quarterfinal action at Rod Laver Arena tonight.

A confident Barty recorded an impressive 6-2 6-0 victory to match her career-best result at her home Grand Slam.

“That was solid tonight,” Barty said. “I had a lot of fun out here. I was able to serve and find a lot of forehands in the centre of the court. I was happy to take the game on, be aggressive off my forehand and not worry if I missed a couple.”

The 25-year-old Australian, who was the only woman to advance to this year’s quarterfinals without losing a set, broke Pegula’s serve in the opening game.

Yet it wasn’t the cleanest start from the top seed, tallying 15 unforced errors in the opening six games. However with a 4-2 lead in hand, there was no need for concern.

Barty broke the 27-year-old American again in the seventh game, then served out the first set to love after 35 minutes on court.

Pegula, facing a reigning world No.1 for the first time in her career, simply had no answers.

The top-seeded Australian raced through the second set, cutting down her unforced errors and conceding only three points across her service games.

“Jess made me work very hard and I think the scoreline definitely wasn’t an indication of how the match felt,” Barty said.

“I knew I had to play my very best tennis tonight to match up with Jess and put her under the pump.”

Barty finished the match with six aces and 17 winners in total, proving why she is firming as the red-hot title favourite.

The last to do was Wendy Turnbull, a three-time semifinalist between 1980 and 1984.

Barty now has her sights set on ending a 42-year drought and becoming the first local contender to reach an Australian Open women’s singles final since Turnbull in 1980.

“It’s always nice to be at the business end of a Grand Slam and to give yourself the opportunity to play for some of the biggest titles,” Barty said.

Barty has won two of her three previous matches against the big-hitting 26-year-old, including their most recent meeting in the Roland Garros 2019 quarterfinals.

“I can’t wait, I know it will be a good one,” Barty said of the match-up. “Whoever connects better will be in a final, how good.”