The retiring Dylan Alcott faces a tough first opponent in his final Australian Open, with Ben Weekes and Heath Davidson also set to compete in their home Slam. 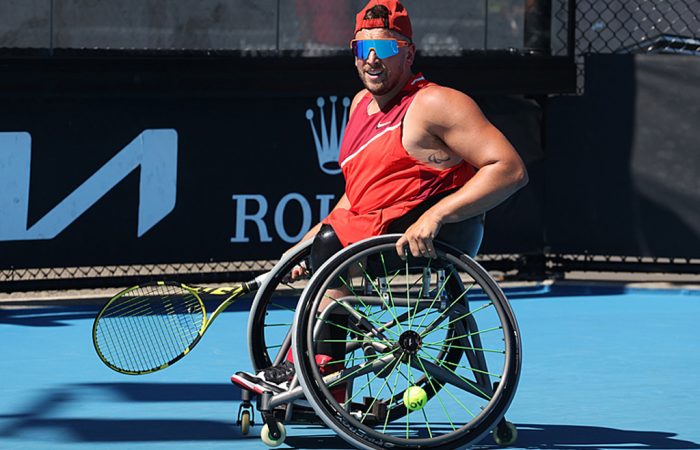 Following the release of Australian Open 2022 wheelchair draws this morning, Alcott is scheduled to face rising talent Niels Vink of the Netherlands in his first match.

“It’s a huge first match. I’m playing not only my good mate, but also I think probably my biggest competitor,” Alcott said of the teenager.

“He’s an awesome talent and a great guy who’s trying to rip my head off, which I love.”

At just 19 years old, Vink has already played Alcott in a Grand Slam final, with the Australian claiming a 7-5 6-2 victory at the US Open last year.

Alcott sits on the same side of the draw as Brit Andy Lapthorne and South Africa’s Donald Ramphadi.

Speaking ahead of his final Australian Open campaign, the 15-time Grand Slam quad wheelchair singles champion reflected on his journey in the sport.

“I feel grateful to be honest, because of all the support I’ve had,” said Alcott.

“This was my purpose, to change perception so that people with disabilities could live the lives they deserve to live, and I really wanted to get greater representation for athletes with disabilities.

“Did I think it would happen? No. Has it happened more than I expected? To the moon and back.”

Alcott, who announced Australian Open 2022 would be his final event last November, is excited to get one last chance to celebrate at his favourite Slam.

“I’m not feeling nervous, I’m just pumped. I’ve done all the work. And more importantly I’m just going to try and enjoy myself. It’s a celebration of everything we’ve done together,” he enthused.

“Everybody, the Australian public, Tennis Australia, myself. I just love the event so much. I’m just going to try and enjoy the moment.”

Alcott’s doubles partner Heath Davidson sits in the other half of the draw, and is relieved not to face his good mate in his opening match.

“I was very much staring at Dylan’s name because I think I’ve had him six years in a row first up, so when I didn’t get him, it was a bit of a relief,” Davidson joked.

Davidson will instead face 40-year-old Japanese veteran Koji Sugeno in his quarterfinal.

“We’ve had some good battles over the journey so I’m going to give it my best.”

America’s David Wagner and the Netherlands’ Sam Schroder will face off in the other quarterfinal on that side of the draw.

Davidson will also be shooting for a fifth straight doubles title alongside Alcott, and is thrilled to be sharing the journey with his long-time friend for one last time.

“We just want to enjoy it. And if that means I get to hold silverware one last time with him that’s great, but no expectations just enjoyment,” Davidson said.

“If not I’m just happy to have been on this journey and excited to do it one more time with him.”

At 34 years of age, Davidson has seen wheelchair tennis grow significantly in Australia, thanks in no small part to their success.

“It was only 10 years ago when we had to pay to play in the Australian Open, now we are being recognised as the elite athletes that we are,” Davidson said.

Draws for the men’s and women’s wheelchair singles events were also released today, with Australian stalwart Ben Weekes gearing up for yet another Australian Open campaign.

The five-time Paralympian will take on Dutchman Tom Egberink in a quarterfinal, with the 37-year-old conscious of the challenge ahead.

“He had a pretty good year last year. He won silver in Tokyo, so he’s playing pretty well. I’m looking forward to that one,” Weekes said.

Despite nearly 20 years at the highest level, Weekes remains as passionate as ever as he begins a new season.

“I just love to play tennis – I love being out there and competing,” he said.

“I’ve always got things to work on, so as long as I have the passion to get out on the practice court every day to try and get better, I’ll keep going.”

Weekes also reflected on the growth in wheelchair tennis since his start two decades ago.

“When I started there were some players who were the best in the world who didn’t get the recognition they deserved,” said the Sydneysider.

“They put it in all the hard work then so we can get the results now, so we need to remember that.”

The Australian Open 2022 Wheelchair Championships will take place from Sunday 23 to Thursday 27 January at Melbourne Park.