Dylan Alcott to end his career on the ultimate high note

Dylan Alcott will leave tennis with a powerful legacy and at the top of his game, after announcing that AO 2022 will be his final professional tournament. 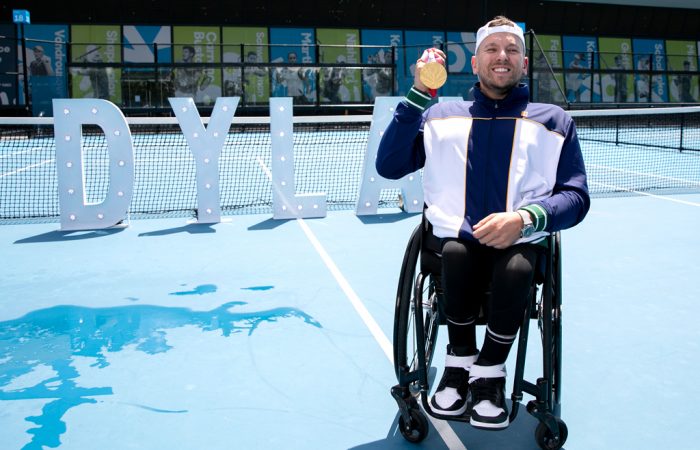 Dylan Alcott will leave the sport on the ultimate high note, having announced his professional retirement as a reigning and long-time world No.1.

Australian Open 2022 will be Alcott’s final tournament, where he will aim to defend the quad wheelchair singles title that made him the first player – in any format – to triumph in seven straight years at the Australian Open.

“The Australian Open is such a special place for me. There’s no way I could have finished my career at the US Open a few weeks ago because the US Open’s not my home,” an emotional Alcott commented at Melbourne Park today.

“This is my home and the Australian Open changed my life. Tennis changed my life … I owe it everything and what better way than to finish in my home city in front of big, big crowds after the year that we had the last couple of years. It’s going to be incredible.”

It follows a career-best season for Alcott, who is the first man in history to complete a Golden Slam. Losing just one singles match for the entire 2021 season, Alcott was a gold medallist at the Tokyo Paralympics and claimed every Grand Slam quad wheelchair singles final.

The history-making milestone adds to Alcott’s gold medal performance in singles and doubles (alongside Heath Davidson) at the Rio Paralympics in 2016.

To date, he has claimed 23 Grand Slam titles overall, with 15 of those victories in singles and a further eight in doubles.

The last dance 🇦🇺 🏆 🙌 @DylanAlcott has officially announced his retirement and will play his final tournament at #AO2022.

One last ride for the 7x #AusOpen singles champion. pic.twitter.com/zadSwoREGm

“I’m a little bit more proud of the work that we’ve done off the court to be honest,” Alcott admitted.

“Being a good tennis player is probably the 32nd priority in my life and I mean that. Being a good person is No.1. A good family member, a good friend and a good partner to my partner Chantelle.

“And being a good advocate for my community to change perceptions for people like me, so they can live the lives they deserve to live and get the opportunities that I’ve had.”

It’s an outlook that ensures a powerful legacy for the 30-year-old Melburnian, who has combined his many on-court records with tireless efforts to build the profile of wheelchair tennis.

Alcott is particularly proud of the role that his home Grand Slam has played in that progress.

Prime time wheelchair tennis finals, televised live through the tournament’s broadcast partners, have since become a prominent feature of the Australian Open.

Earlier this year, it was the first Grand Slam to expand its quad wheelchair singles draw to an eight-person knockout event.

“It’s just been life-changing, hopefully for a lot of people,” said the seven-time AO champion. “And it’s set the standard of how athletes with a disability should be treated, because we are worthy. People want to watch. We do give a return on the sport.

“I’m really excited about the next generation who are going to get the same opportunities.” 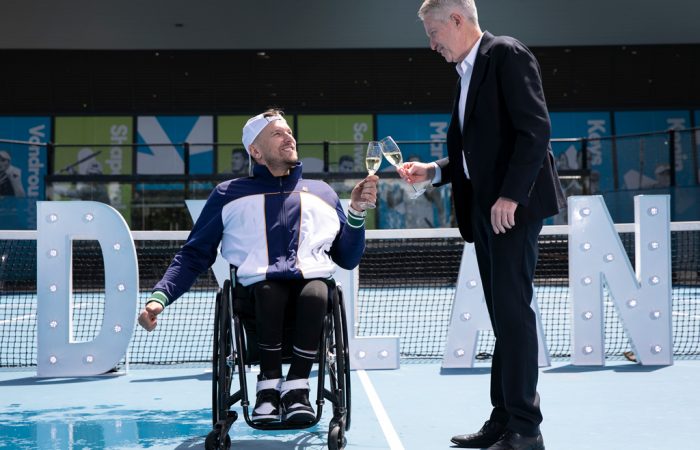 Tennis Australia CEO Craig Tiley paid tribute to Dylan and his incredible career, while proposing a toast in his honour.

“Dylan is an incredible person, his influence, infectious personality and positivity has impacted countless people, and across a far wider field than just sport or tennis.

“It’s largely because of Dylan’s profile, boundless energy and popularity that we now see our incredible wheelchair athletes on centre court during the Australian Open, and on prime time  TV.

“Dylan was always adamant that he wanted to be treated as part of our elite playing group, not as a wheelchair athlete, and that’s what we’ve always done. And now Dylan is not just a great champion who has set record after record, he’s an unbelievable ambassador for our sport.

“I can’t wait to see Dylan compete one last time at the AO in January, and I know the fans will turn out in droves to support him,” Tiley continued.

“Although we will miss Dylan on the court, we know there’s so much more to come. I can’t wait to see what the next chapter brings and I wish Dylan the very best of luck.”

Wow. What a day. Thank you to everyone for all the incredible messages. I feel extremely grateful for all the love and support. I wasn’t sure how I would feel once I announced my upcoming retirement at the 2022 @australianopen – but now I’ve done it, I’m ready for 1 more crack xx pic.twitter.com/oqOihVKcbP

Some of Alcott’s proudest achievements in sport are when he’s played as part of a team, and particularly representing his country.

The Victorian returned to his first love of tennis after an impressive career in wheelchair basketball, in which he claimed a gold medal with the Australian Rollers team at the Beijing Paralympics in 2008, and silver at London in 2012.

Adding to their gold medal feats at Rio in 2016, the Australians were silver medallists in Tokyo this year.

“It’s not ‘me’, it’s ‘we’. We’ve all done this,” Alcott said. “My team, my family, my doubles partner Heath. Everybody. Everybody that’s a part of what we do. It’s a big juggernaut but it’s really changed perceptions I hope.”

While his success is unparalleled in tennis, the long-time world No.1 measures his achievements in far more than the impressive numbers he’s amassed.

“I often actually forget how many Slams I’ve won, because it’s not my purpose,” he commented after completing his Golden Slam with a third US Open singles title.

“My purpose is changing perceptions for people with disability to live better lives. If I’ve played a very, very small role in that, then I’ve done what I need to do.”

Alcott’s role in those changed perceptions is helped by the many community and business interests he has developed in parallel to his tennis career.

Alongside prominent roles in the media, Alcott is the co-founder of Get Skilled Access and Able Foods, a meals distribution company. He also runs his own charitable foundation and Ability Fest, which has raised money to support young Australians with a disability.

While he looks forward to further developing those pursuits in his post-playing life, Alcott is also delighted at the foundation he’s established in the game.

“Tennis has given me that platform to do it and I’m forever grateful,” he said. “I’m really looking forward to getting out there and doing my thing one more time and hopefully making it 16 (major singles titles) and going out on a high.”

Ending on the ultimate note 💙@DylanAlcott will contest his final professional tournament at AO2022.

With 23 Grand Slam titles and a Golden Slam in a stunning 2021 season, it’s been a spectacular career for the long-time world No.1.

Wheelchair tennis career: Begins in 2006, when Alcott enters the ITF top-100 at age 16. After a success stint in wheelchair basketball, returns to the sport in 2014