Surrendering just eight games on her way to the fourth round, world No.1 Ash Barty is in full command at the Australian Open. 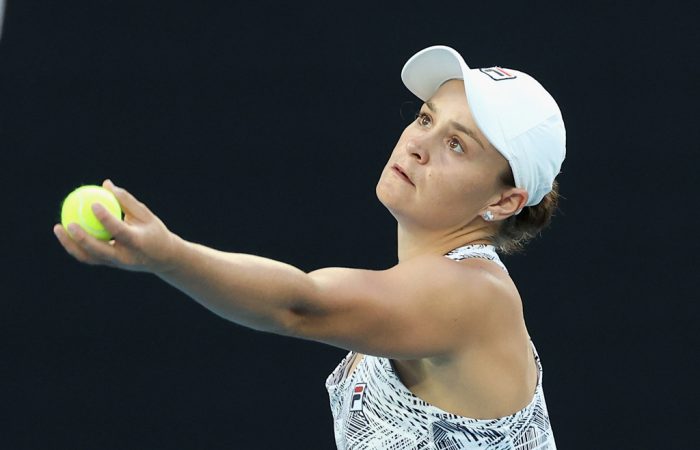 Ash Barty has been to the fourth round of her home Grand Slam three times before – but never with the authority she’s commanded at this Australian Open.

After dropping just three games on her way to the third round, the world No.1 tonight progressed to the second week with a 6-2 6-3 win over Camila Giorgi.

Barty’s two previous wins this week were over qualifiers, with each progression requiring less than an hour.

A third career meeting over Giorgi was expected to be a far greater test, with the experienced Italian known for her fierce groundstrokes and refusal to be intimidated by big-name opponents.

For a brief period, that was what unfolded at Rod Laver Arena. After surrendering a service break in a nervous start, Giorgi produced a series of forehand winners to earn critical break points against Barty.

But from 0-40 down, Barty saved an eventual four break points and from that point onwards, the world No.1 completely dictated.

After securing the first set in 34 minutes, the Australian gained a decisive break in the sixth game of the second set and secured her victory in just over an hour.

🇦🇺 @ashbarty is back into the second week of the #AusOpen, defeating Camila Giorgi 6-2 6-3.#AO2022 • #AusOpen pic.twitter.com/IvqiU8VSbJ

“I thought tonight was really clean. I thought I look after my service games really well,” said Barty.

“I did well to get out of a really tricky one, being 0-40 down and I think I was just able to keep momentum going, make returns when it mattered most in important moments and overall, a pretty good performance I think.”

With a seventh straight match win to start her 2022 season, Barty also recorded her 58th consecutive service hold – a figure that was helped by winning 93 per cent of her first serve points against Giorgi.

There were also four aces and 11 winners for Barty, while the Italian’s most notable statistic was her 24 unforced errors.

It points to the pressure that the world No.1 can create with her unique court craft and calm under pressure.

She will have her next opportunity to showcase those weapons against Amanda Anisimova, who eliminated defending champion Naomi Osaka in three sets.

Barty famously survived a three-set semifinal with Anisimova at Roland Garros in 2019 and went on to achieve her Grand Slam breakthrough.

“I remember that I learned a lot from that moment. That was a turning point in my career, and you have to be able to take learnings from those moments, as hard as they are sometimes, and I was able to navigate and find a way through,” Barty said of her lone career meeting with the American.

“At that point in my life, in my career, it was a massive turning point … without a doubt we will take that and use that experience, use those feelings and those emotions as best we can come Sunday.”