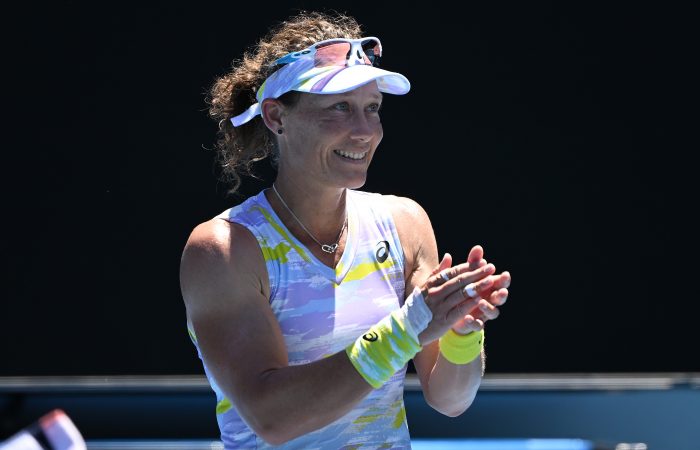 World No.11 Anastasia Pavlyuchenkova proved too solid, scoring a 6-2 6-2 victory at Melbourne Park.

The 30-year-old Russian struck 21 winners to Stosur’s nine, and only lost 11 points on serve in the 69-minute encounter.

An adoring Kia Arena crowd gave Stosur a standing ovation at the conclusion of the match, showing their appreciation for the US Open 2011 champion.

An emotional Stosur then addressed the crowd in a special on-court presentation with Tournament Director Craig Tiley, before she was joined by her family and friends for a lap of honour.

“It was a really special moment for me, so thanks for coming and sharing it,” Stosur said.

“I’ve done more than I ever thought possible. I dreamed of winning a Grand Slam and do what I dreamed of as a little kid, I think is phenomenal.

“I couldn’t ask for anything more. I’ve had many great moments here in Australia and around the world. It’s been amazing.”

Stosur achieved a career-high singles ranking of world No.4 and remarkably spent 452 consecutive weeks as Australia’s top-ranked woman between October 2008 and June 2017.

Her 69 Grand Slam main draw appearances are the most of any Australian player – man or woman – in history.

Stosur’s 20 Australian Open appearances are also a record, tying Lleyton Hewitt for the most among Aussie players.

Most importantly, Stosur leaves an incredible legacy and can take credit for inspiring the future generation of Australian stars.

Maddison Inglis, a 24-year-old from Perth who is enjoying a career-best run at Australian Open 2022, names Stosur as her favourite player. While world No.1 Ash Barty also respects Stosur’s influence.

“She’s an Australian champion, plain and simple,” Barty commented earlier this week. “She has set the tone for us Aussies as tennis players for years and years.”

Stosur now turns her attention to doubles at Australian Open 2022. The world No.15 has progressed to the second round in the women’s doubles competition alongside China’s Zhang Shuai and will team up with fellow Aussie Matt Ebden in mixed doubles.

She also plans to continue playing doubles on tour throughout 2022.