After a semifinal run at last week's Adelaide International, Thanasi Kokkinakis opens with a win in the second event. 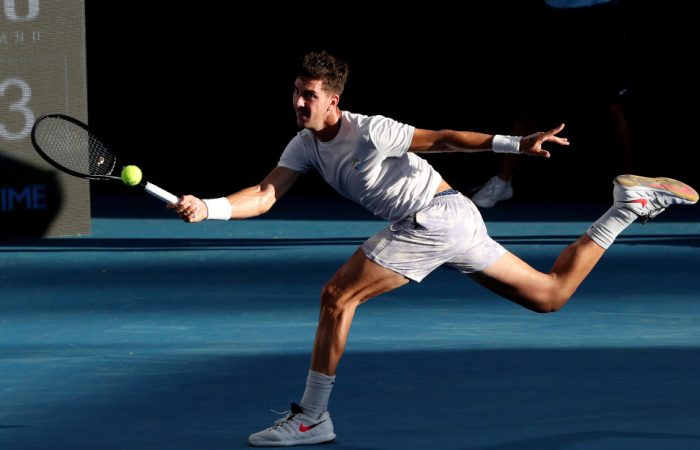 Thanasi Kokkinakis continued his impressive form in his home town, with victory over the dangerous but erratic Benoit Paire kin the first round.

Buoyed by a supportive crowd at The Drive, Kokkinakis required an hour and 10 minutes to record the 6-4 6-0 win.

The Frenchman struck 22 winners to 17 from Kokkinakis in the first set, but also made 20 unforced errors. Kokkinakis was solid as a rock by contrast, making just two.

The South Australian dropped only five points on serve, and won 20 himself off Paire, generating five break point chances along the way.

The second set was a procession with Paire’s resistance dropping away.

He was broken three times in a row to lose the set to love, as Kokkinakis found all the form and rhythm that swept him to a semifinal at the same venue last week.

A strong start in week 2 of the Adelaide International for 🇦🇺 @TKokkinakis after taking out Benoit Paire 🇫🇷 6-4 6-0 in round 1 💪#AdelaideTennis pic.twitter.com/UIpgI0cmoB

“Playing Paire is always a tricky one, you never know what you’re going to get. He’s super talented and pull shots from anywhere, so I had to weather the storm a little bit,” Kokkinakis said on court.

Kokkinakis is full of confidence after a great start to the year, and his next assignment is big-serving American star John Isner.

“I couldn’t have asked for anything more to start the year. This time last year I was grinding,” said the Australian ahead of his meeting with the No.2 seed.

“He’s one of if not the best serve on tour, hopefully I’ll get a few chances and if I do I’ve got to be there and ready to take them.”

Earlier, Maddison Inglis was a first-round winner in the women’s draw, while Storm Sanders and Alex Bolt both recorded opening-round losses.