Philip Sekulic launches his Grand Slam career with an AO2022 qualifying win, with four other Australian men also on the winner's list in Melbourne. 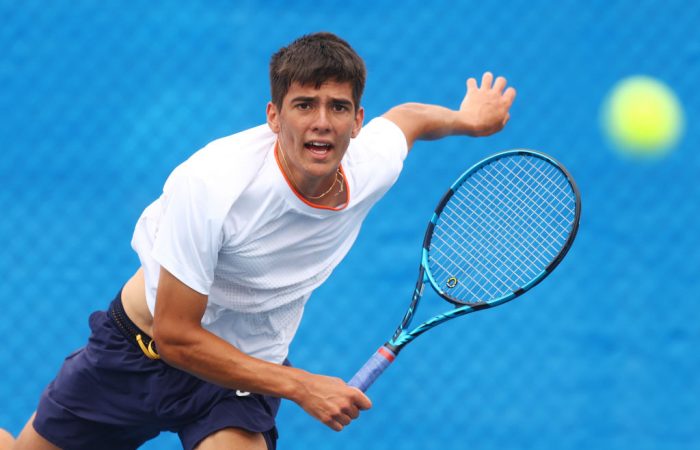 More than 700 rankings places and over a decade of experience separated Philip Sekulic from his first-round Australian Open 2022 qualifying opponent.

But neither of those facts mattered as the 18-year-old Sekulic secured a comprehensive victory over Matthias Bachinger, a world No.234 from Germany.

Playing his first professional match at this level. Sekulic secured his 6-4 6-3 victory in an hour and 19 minutes.

“It was a good match. It’s my first Grand Slam, so I was a bit nervous,” admitted the Brisbane-based Sekulic, who recorded nine aces among 26 winners in total.

“(I’m) happy to get the win. I thought I served really well today so yeah, I was happy with my performance.”

Today’s milestone follows an impressive end to 2021, in which Sekulic reached back-to-back finals on the ITF Tour.

He was subsequently named Male Junior Athlete of the Year at the 2021 Australian Tennis Awards.

“I think really helped me because he hits the ball really well and I was able to sort of get into a good rhythm with my tennis and hitting the ball,” said the teenager.

“I think those sessions definitely helped me, just seeing the way he works, the way he trains, what he does on the court, that must have helped me. I try to do the same stuff myself I guess.”

Sekulic is also helped this week by a new coaching partnership with Gavin Van Peperzeel, who peaked at world No.251 in his own career.

“I really like working with him,” said Sekulic of the 29-year-old Queenslander. “He’s a bit younger so he can still hit really well, move and train with me so I think it’s good and yeah just like how I can have a laugh with him as well, a bit of banter sometimes, which is good.”

A wildcard into the Australian Open qualifying event, Sekulic is currently ranked world No.990.  The Queenslander will aim to continue his winning form in the second round against Dmitry Popko, a world No.181 from Kazakhstan.

“I’m confident in my game. If I’m playing well I can beat a lot of these guys,” he said.

There was also a win today for Max Purcell, who outclassed Russia’s Evgeny Donskoy on the newly minted Kia Arena.

Purcell, who currently holds a world No.176 ranking, required just over 90 minutes to achieve his 6-4 6-2 victory.

The 23-year-old is settling into  2022 after an extended off-season, having returned home to Sydney last October.

A focus with coach Nathan Healey in that period included a focus on Purcell’s net and transition game, which factored as he smoothly navigated Donskoy today.

“I felt a lot better on court today than I did in my last singles match,” said Purcell, who competed at the ATP Cup in Sydney last week.

“Unfortunately it looked like Donskoy was a bit underdone because he’d tested positive before coming to ATP Cup, so he didn’t get much time on these courts getting used to these conditions – but I’ll take the win, get ready for the next round.”

That match for Purcell is over Jiri Lehecka, a world No.141 from the Czech Republic. Purcell admits his knowledge of the Czech is limited.

“It’s actually nice getting to play someone I don’t know. There’s no expectation there or anything,” Purcell commented.

“I can kind of just feel into the match rather than going in there with a particular plan. It will be a nice match to get going.”

Dany Sweeny would also be delighted with his start to Australian Open qualifying, the wildcard recipient claiming a 7-5 6-3 win over world No.166 Frenchman Gregoire Barrere.

Sweeny reached the third round of qualifying last year and is confident he is in a good place to push beyond that in 2022.

“I think last year I learnt to deal with nerves a bit better. I expect to do well, but under the pressure of matches you learn a lot, and you find out how to deal with pressure a lot better.”

And Jason Kubler moved a step closer to a fourth Australian Open campaign with a come-from-behind victory in the first round of qualifying.

Kubler won the last eight games and 33 of the last 43 points of the match as he prevailed 3-6 6-4 6-0 over Italian Lorenzo Guistino.