Preparing to contest both singles and doubles finals at today’s Adelaide International, Ash Barty is again showcasing her best tennis on Australian soil. 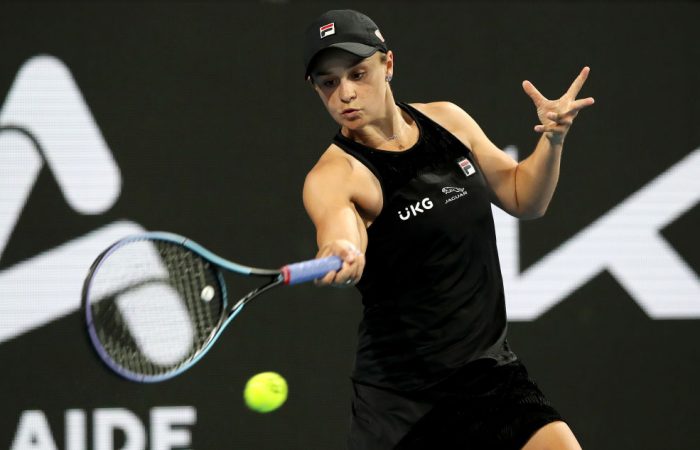 With an eye on lifting a 14th trophy in her first 20th WTA final at the Adelaide International, Ash Barty has already made quite the statement in 2022.

For the second straight year, Barty has progressed to a final in her season-opening tournament. And arguably more remarkable is that the world No.1 is not only contested her first event of 2022 but her first since the US Open in September last year.

“It is exciting to be able to play well here in Australia,” said Barty, when asked about the significance of replicating the early 2021 success she also achieved as a champion at the Melbourne Summer Series.

“This is where I want to play my best tennis. I want to give myself an opportunity to play for titles in Australia. It’s something really exciting to start the year off as an Aussie player in front of our home fans.”

It will be a 20th WTA final and fifth on home soil for 🇦🇺@ashbarty!#AdelaideTennis pic.twitter.com/870MPZAlq1

It’s arguably even more exciting for the fans who have witnessed some breathtaking tennis from Barty this week.

After recovering from a set and a service break deficit against talented Coco Gauff in her 2022 opener, Barty has won six straight sets and 26 service games to progress to the singles final.

She’s also thrived in doubles, teaming with Storm Sanders to reach the final of that event.

Despite a surprise second-round loss at the 2021 tournament, Adelaide is clearly a happy hunting ground for the tournament’s top seed.

In 2020 Barty claimed a first trophy on home soil in the South Australian capital. With an electric atmosphere created by the crowd in her three previous matches, Barty embraces the warm support from the local fans.

“It’s been brilliant. The crowd tonight was fantastic,” said Barty after a straight-sets win over Iga Swiatek in the semifinal.

“I felt like there was a lot of energy, a lot of fun. I felt like Iga and I both brought a really good level. The crowd was able to get involved.”

> READ: Ash Barty in a happy place at Adelaide International

There’ll be more of that energy as Barty faces No.7 seed Elena Rybakina in today’s final, which is scheduled for a 4pm start at The Drive.

Rybakina, from Kazakhstan, holds a ranking of world no.14 and is contesting her eighth final on the WTA Tour. The 22-year-old most recently lifted a trophy on Australian soil, triumphing at Hobart in 2020.

“She’s an exceptional ball-striker. She loves to control the centre of the court. Obviously looks to control her service games. Then it kind of allows her to play more freely on her return game,” said Barty, who has also showcased an imperious weapon in her serve this week.

“It’s going to be important for me tomorrow to again continue to look after my own service games and give myself a chance to have that sense of freedom, still play aggressively when I have the opportunity.”

Barty and Rybakina have faced off once before on tour, with the Australian the winner of their third-round match at Australian Open 2020.

“I’m excited for the challenge,” said Barty, who is clearly relishing the opportunity to add to an already impressive record on home soil.

“The more times you can walk on the court, the more exciting it becomes. So it’s certainly really nice to have an opportunity in two finals tomorrow.