With a place in the doubles final already secured, Ash Barty tonight takes on Iga Swiatek in the Adelaide International semifinals. 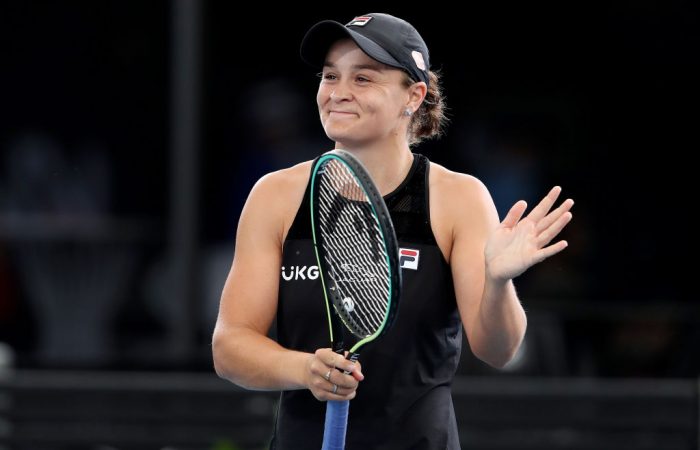 Ash Barty aims to maintain a perfect start to season 2022 when she meets Iga Swiatek tonight in the semifinals of the Adelaide International.

The world No.1 will also contest the final of the doubles with her close friend Storm Sanders. The Australian duo faces No.3 seeds Darija Jurak and Andreja Klepak, from Croatia and Slovenia respectively,  tomorrow.

“It was nice to get a couple of wins,” said Barty yesterday, after a big day at The Drive featured a win over Sofia win in the singles quarterfinal and alongside Sanders, victory over Nadiya Kichenok and Sania Mirza in the doubles semifinal.

“I thought all-in-all (there were) small improvements from the last match in certain areas, but we’re still looking to get better and better.”

It was a typically modest assessment for the down-to-earth Barty, who has quickly found her competitive footing in her first tournament since the US Open last September.

After a gritty three-set win over Coco Gauff to open her season, the world No.1 served up a masterclass against Kenin. She fired 17 aces and dropped just one point on her first serve in her straight-sets victory.

“It’s always something I’ve tried to use as best as I can as a weapon,” Barty said of her serve.

“It’s the one shot in tennis that you have full control over, so trying to develop that as best that I can, trying to use that as a weapon, has always been a big part of my game.”

An objective to test her form early against highly credentialled opponents has been equally successful for Barty, who trailled by a set and a service break before her opening-round win over Gauff. She required only 68 minutes to overwhelm Kenin in the next match.

“That’s what this kind of week is about. It’s about seeing where my level is at,” said the Queenslander.

“It’s about trying to give myself an opportunity to play some matches. We’ve got that now. We’ve got a couple of matches under our belt, another one coming up against a quality opponent.”

To be the best, you have to beat the best 💪

🇦🇺 @ashbarty is doing just that to secure her spot in the #AdelaideTennis semifinal. pic.twitter.com/SbKWV12PL6

Barty embraces her semifinal challenge against Iga Swiatek, a fellow Roland Garros champion and a practice partner of the world No.1 earlier this week in Adelaide.

“I think the challenge is trying to not let her control the point too much out of the centre of the court and keep her moving and try to bring it back to my weapons, if I can.”

The Australian was a straight-sets winner over Swiatek in their lone match on the WTA Tour, outclassing the 20-year-old from Poland in Madrid last year.

Barty can take confidence from both that performance and previous highs in Adelaide, where she lifted her first trophy on home soil in 2020.

In a fascinating twist, Swiatek was the defending champion of the 2021 Adelaide event.

For Barty, a further boost comes from a successful campaign with Sanders in doubles.

“It’s exciting for Stormy and I to play for a doubles title at home. It’s always nice to get matches in these first couple weeks of the year,” smiled Barty, also a former world No.5 in doubles and a winner of 11 doubles titles on tour.

“I love playing with Storm. I enjoy her company. She makes me smile. She makes me laugh. When we’re on the court, we complement each other really well.

“It’s exciting as two Aussies to be able to play a final at home the first week of the year is pretty cool.”