World No.1 Ash Barty serves up a masterclass against Sofia Kenin to move into the Adelaide International semifinals. 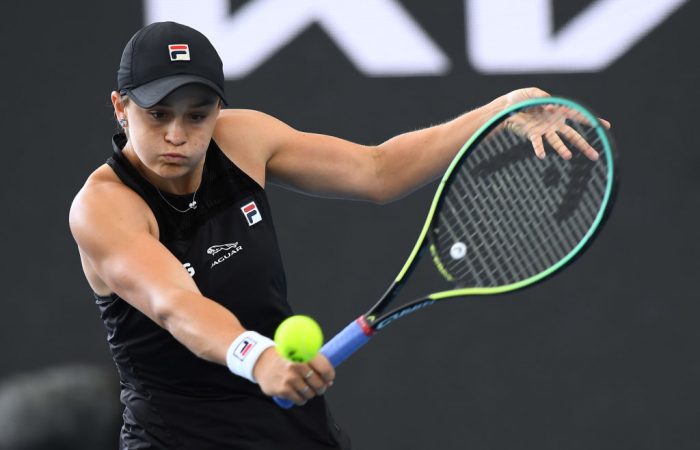 Ash Barty has recorded a statement win over Sofia Kenin to progress to the semifinals of the Adelaide International.

The world No.1 claimed her 6-3 6-4 victory in just 68 minutes, setting up a showdown with No.5 seed Iga Swiatek or former world No.1 Victoria Azarenka.

There was a further high as Barty combined with Storm Sanders to reach the doubles final. In a hard-fought victory, the Australian duo defeated Nadiya Kichenok and Sania Mirza 6-1 2-6 [10-8].

Barty had started relatively slowly against Coco Gauff in her opening match of the 2022 season, but there was no questioning her early form against Kenin.

The Queenslander surrendered just five points on serve in the 34-minute first set, with seven aces highlighting her most dangerous weapon.

Kenin by contrast, faced breakpoints in two of her four service games, the turning point coming when Barty converted on her fourth break point opportunity in an extended sixth game.

The Australian’s dominance only improved as the match progressed, Barty piling on the pressure as she broke Kenin’s serve again in the opening game of the second set.

The last time Barty faced Kenin, in the high stakes setting of the AO 2020 semifinals, she held set points in each of the two sets but couldn’t convert any of them.

Barty would allow no such openings this time around, finishing with 17 aces and two double faults. Closing out the match with minimal fuss, she recorded a total 30 winners against 15 unforced errors.

“It felt pretty good today. I think I was able to look after my service games pretty well and it was a lot of fun playing out here again, (to) get some more court time and start to feel a little bit better,” said Barty, who has also teamed with Storm Sanders to reach the doubles semifinals in Adelaide.

Already showing rapid improvement in her first two matches of the 2022 season, Barty was also delighted to compete against Gauff and Kenin. At age 17 and 23 respectively, the young Americans are among the mostly highly touted players on tour.

“That’s what you want. Honestly, it’s nice to come out here and be tested right from the start and know that you have to bring your very best level,” said Barty, who takes none of her progress for granted.

“Obviously looking at both these last two matches there’s still work to do. We go back to the drawing board and continue try and do all the right things.

“It’s been a really solid start and were happy with the foundation that we’ve kind of set to start the year off.”