Determined to build on the momentum of her career-best season, Astra Sharma is also delighted to launch her 2022 campaign on home soil. 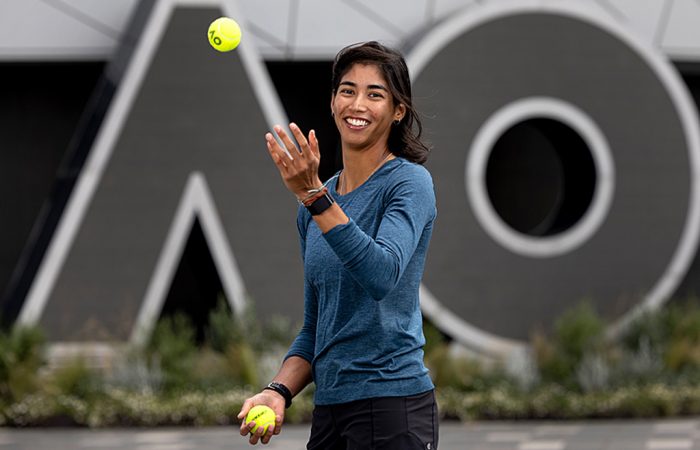 Astra Sharma is relishing time at home in Australia after a career-best 2021 season, highlighted by a maiden WTA title.

Gearing up for her fourth consecutive Australian Open main draw appearance, the world No.98 has an extra spring in her step at Melbourne Park this week.

“For 10 months of last year, it always felt like you were on someone else’s home ground, where the crowd support is always for someone else.

“Back here everyone knows who you are, and they are always friendly and smiling so it’s awesome being in Melbourne.”

Sharma completed her 2021 season at Indian Wells in October with some injury niggles emerging, but a freshen up at home in Western Australia has her ready to return to the court.

“My rib injuries have all healed in the off-season. I’ve had a long break, so it’s been a bit of a trek to get back to match fitness but I’m good to go.

“It was definitely good to be back in Perth with the family for about two months.”

Sharma’s 2021 highlight was claiming her first WTA title at Charleston, with victory over Tunisia’s Ons Jabeur in the final.

Sharma drew inspiration for that winning performance from former US Open champion Sam Stosur, who claimed the Charleston title in 2010.

“I actually saw a picture of Sam on the walls of Charleston before we started and I was thinking about my practices with her and what a physically imposing player she is,” said Sharma.

“I thought ‘wow, I should probably try to emulate that on the clay’, so I tried to be athletic and strong like her and make the points really long.

“I did message her and her coach Stubbsy (Rennae Stubbs) about it afterwards, but I felt a bit weird,” she laughed.

> READ: Stosur – “I just really want to enjoy the moment.”

Stosur is set to play her 20th and final Australian Open singles event this month and Sharma spoke glowingly about one of her heroes.

“Some really big shoes to fill for sure, she trailblazed for a lot of what we do today and especially for someone like me, who grew up idolising her,” Sharma related.

“She’s such a strong character on and off the court, she’s really professional and always really humble.

“I hope she stays in some role within tennis because that would be invaluable for all of us.”

The respect and support within Australian tennis is something Sharma feels has become particularly important, with the game impacted by the pandemic.

“The last 18 months especially, with the Australian players being so isolated, the camaraderie you can experience on tour has been a big part of it,” she said.

“If we can, we’ll go and watch each other’s matches. We are always really supportive and really happy when someone does well.

“We often come from the same place and we train together growing up, so we know how hard the other person works and it’s nice to see that pay off for them.”

Sharma kicks off her 2022 season at the Melbourne Summer Set. She meets Rebecca Peterson, a world No.88 from Sweden, in the first round today.