Daria Saville and Maddison Inglis will turn their attention to Australian Open 2022 after exiting in the main draw of the Adelaide International. 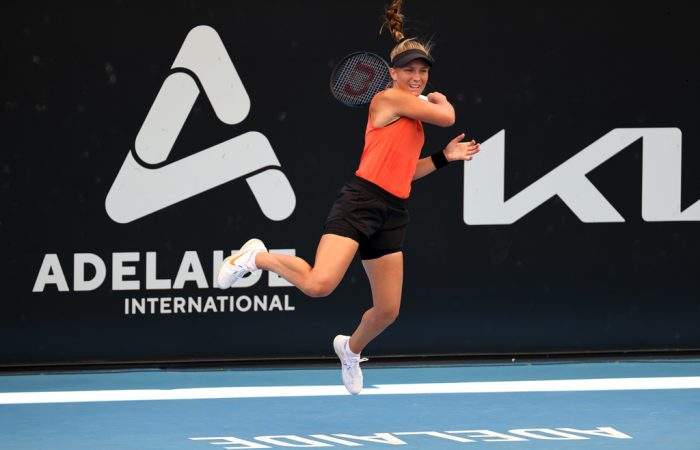 Two Australian qualifiers have gone down at the Adelaide International today, but both leave the city having made strong progress towards the Australian Open.

Comeback queen Daria Saville fought hard against world No.8 and former Roland Garros champion Iga Swiatek, in what was a highly competitive performance.

The Australian challenged frequently throughout and broke back from a deficit in both sets, but ultimately it was serving that proved the difference. Saville produced nine double faults compared to an extraordinary zero from the rock solid Swiatek.

The Polish star eventually prevailed 6-3 6-3 in an hour and 19 minutes.

Saville has already been granted a wildcard into Australian Open 2022 and has won three of her four matches on tour since returning from injury in November.

Fellow Australian Open wildcard Maddison Inglis also exited in the first round at The Drive, with world No.40 American Shelby Rogers claiming a straight-sets victory.

Rogers dominated the opening set, taking it 6-1 in 26 minutes with three breaks of serve.

The American lost only three points on her own serve for the entire opening set.

Inglis fought back in the second, breaking serve herself early and putting constant pressure on her more experienced opponent.

Rogers continued a terrific 18 month stretch in which she’s achieved a career-high ranking, with the 29-year-old pulling away again late in the second set to claim a 6-1 6-3 victory.

Inglis enjoyed a good run through qualifying at Adelaide and will be very much looking forward to her third main draw Australian Open campaign.

Bolt, who turns 29 tomorrow, fought hard in the second set after falling behind a break. The lefthander three break points of his own at 3-4 but couldn’t quite close it out with Cerundolo holding firm.

Meanwhile, Ajla Tomljanovic’s second round match up in the city of churches has been locked in after America’s Sofia Kenin downed Italian Lucia Bronzetti in straight sets.

The two players met twice in the space of a week in 2017, with wins shared at one apiece.

Tonight, Thanasi Kokkinakis and John Millman face off in a highly anticipated all-Australian first round.