Alex de Minaur is looking forward to representing Australia this week at the 2021 Davis Cup Finals. 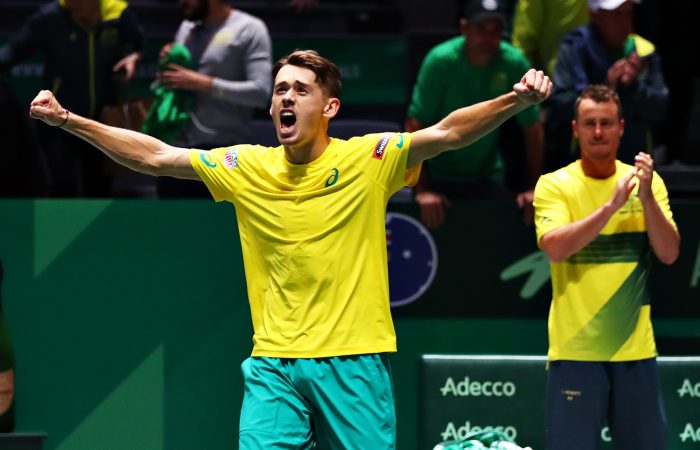 World No.34 Alex de Minaur is excited to spearhead Australia’s charge at the Davis Cup Finals in Italy this week.

The 22-year-old Grand Slam quarterfinalist spoke about the magic of representing his country in the team competition.

“A win in Davis Cup is a next-to-none feeling, a feeling you can’t describe, to be able to lead your country into battle and hopefully get those wins,” De Minaur said.

“That’s why you get your best wins and your worst losses at Davis Cup. Those are the ones that you really feel the most.”

“I think we’ve got a great team of guys. We’re ready to go after it, take it to our opponents and try to go all the way,” said De Minaur.

“It’s been one of those dreams come true, one of those things I’ve always wanted to be, to be able to represent my country in Davis Cup.

“It’s a huge honour and I’m very proud to be representing my country.”

The Australian team is excited to wear the green and gold at this week’s @DavisCupFinals in Europe. #GoAussies https://t.co/nbarLNTK9W

The 2021 Davis Cup by Rakuten finals begin on Thursday 25 November, with 18 nations fighting for the prestigious title.

The draw is split into six groups of three, with Australia facing Croatia and Hungary in the round-robin group stages.

The top team from each group, plus the two second-placed teams with the best records, progress to the quarterfinals.

“It’s going to be very tough. We’ve got to go out there and just try to take it match by match and see what we can accomplish,” said De Minaur.

De Minaur faces a potential showdown with former world No.3 Marin Cilic of Croatia. The Australian defeated Cilic at Queen’s this year in three sets, reversing the result of their marathon five-set clash at the US Open in 2018.

Hungary’s top-ranked player is world No.40 Marton Fuscovics, who is coming off a career-best quarterfinal run at Wimbledon earlier this year.

De Minaur is often compared to team captain Lleyton Hewitt, with the young Australian showing a lot of the trademark grit and passion that was a hallmark of Hewitt’s career.

He also credits Hewitt for his own development and passion for Davis Cup.

“Lleyton’s an unbelievable captain and mentor. He taught me to believe in myself, to believe that I deserve to be amongst the top guys, so he’s put a lot of belief into me,” De Minaur said.

“There’s no one you’d rather play for as a captain, to have on your side, on your bench, supporting, getting fired up with you.”

Hewitt is confident De Minaur can deliver this week too.

“He’s had a really consistent three or four years and has established himself as a top player out there,” Hewitt said.

“He plays well on the hard court surface and potentially played some of his best tennis two years ago in the Davis Cup Finals.”

Despite the finals being hosted in Europe, De Minaur is hoping the Australian team gets some crowd support in Turin as they push for a 29th title.

“Sadly, our supporters can’t come and visit us, so we would love any support we can get.”