Strong friendships and national pride is uniting the Australian team ahead of the 2021 Davis Cup Finals. 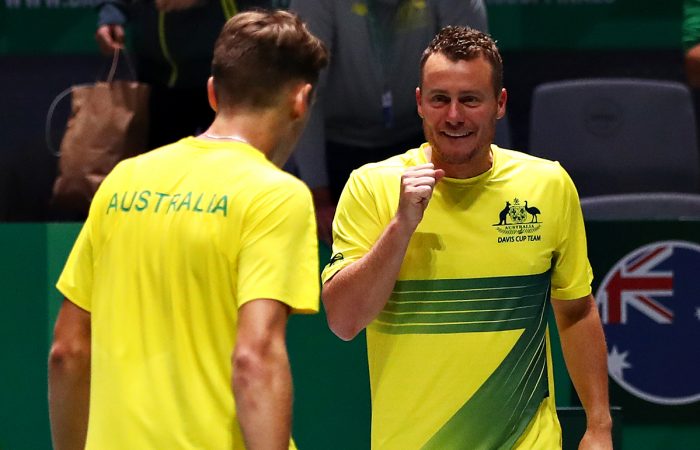 The Australian team is back in Davis Cup action this week after a 20-month hiatus due to the COVID-19 pandemic.

Australia is among 18 nations competing at the 2021 Davis Cup Finals in Europe, which return after being postponed in 2020.

Captain Lleyton Hewitt is feeling confident his Australian team can challenge for the prestigious title.

“We had a really good run in the Davis Cup Finals two years ago, where we ended up winning our group stage pretty convincingly,” Hewitt said.

“We ended up losing an extremely tight quarterfinal with Canada, who went onto make the final, so that gives us a lot of confidence.

“We have a slightly different team, but a lot of the guys have played in the Davis Cup before and understand the pressure and demand of representing your country and playing well.”

Australia’s group in the round-robin stage contains Croatia, led by US Open 2014 champion Marin Cilic, and Hungary, whose top ranked player is world No.40 Martin Fucsovics.

“I think a big focus is on Croatia in our first match,” Hewitt said.

“They are both quality teams. They’ve done really well to qualify, especially Croatia. They’ve won the Davis Cup before, so they know what it’s all about.”

Hewitt spoke about the close-knit group of Australian players, the camaraderie they share, and the benefits that provides them when on the road.

“As an Australian player, you’ve pretty much had to base yourself overseas to give yourself the best opportunity of playing all the best tournaments and not having to quarantine in Australia every four-to-five weeks,” Hewitt said of the 2021 challenges for his team.

“It hasn’t been easy, but I know the boys are really looking forward to the Davis Cup.

“All the boys get along extremely well and they are always pushing each other to get the best out of the training sessions we do have. That’s why I feel comfortable with the potential doubles combinations we can use.

“It makes my decision about who to have on the team and who to play together a lot easier.”

Emerging talent Rinky Hijikata, a 20-year-old who has won four ITF titles this season, is also in Turin as a hitting partner for the team.

“He’s had a really solid couple of years,” Hewitt said.

“He has gone from strength-to-strength, and the more he gets to see the standard you have to be in order to make it on the tour and to see up close, especially how Tony Roche runs the practice, can only be a big help.”

Alex de Minaur believes one of the team’s biggest strengths is their close-knit friendships.

“I think it’s the camaraderie, the team and the team chemistry,” De Minaur said.

The 22-year-old is one of six Aussie men inside the world's top 100 #GoAussies https://t.co/HYnq9VEwRZ

Pride in competing for Australia is a quality Hewitt continues to instil in his team.

“Davis Cup is always something that I hold dear to my heart,” Hewitt said.

“To be alongside the boys again on the competitive court and to try and give them a slight advantage out there, and give them the belief that they can go out and compete against the best teams in the world, is really special.”

The Davis Cup by Rakuten Finals will be played across three cities – Madrid, Turin and Vienna. Australia will compete in Group D alongside Croatia and Hungary at Pala Alpitour Arena in Turin, starting on Thursday.