Sam Stosur and Zhang Shuai have lost their second round-robin match at the WTA Finals in Guadalajara, ending their chances of claiming the prestigious title. 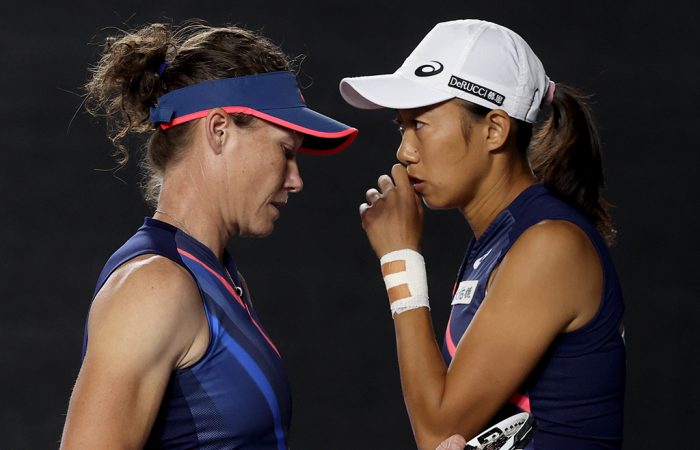 Sam Stosur and Chinese partner Zhang Shuai’s title hopes at the WTA Finals have been dashed after a three-set loss in Guadalajara.

Seventh seeds Darija Jurak of Croatia and Andreja Klepac of Slovenia scored a 6-7(10) 7-6(4) [10-5] victory in their hard-fought round-robin clash today.

The loss means Stosur and Zhang are now unable to progress to the semifinals, even if they win their final round-robin match later this week.

With all four players holding serve throughout a tight opening set, it was Stosur and Zhang who took control in the tiebreak.

Saving two set points in a fiercely-contested end to a high-quality set, the US Open champions eventually closed it out on their fourth set point opportunity.

The first break of the match was not recorded until the 17th game, with Stosur and Zhang striking to edge ahead in the second set. But unable to consolidate, the set extended into another tiebreak.

Jurak and Klepac levelled the match and from there, maintained their momentum to clinch the deciding match tiebreak after one-hour and 55-minutes on court.

Aoyoma and Shibahara, the winners of five tour-level titles this season, are undefeated so far this week and guaranteed to progress to the semifinals.

However, Stosur and Zhang will be determined to end their season on a high. They do own a winning record against the duo too, defeating them in straight sets during their US Open title-winning run in September.