Priscilla Hon, Daria Gavrilova and Storm Sanders are excited to be representing Australia at the Billie Jean King Cup Finals this week. 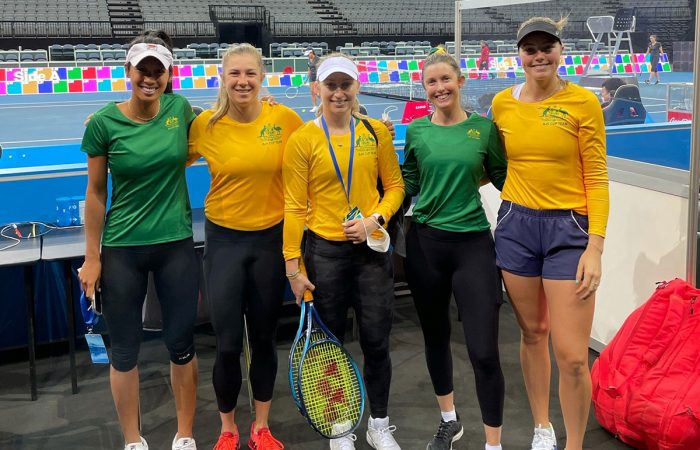 Preparing to compete for the first time in almost two years, the Australian team is relishing each other’s company at the Billie Jean King Cup Finals in Prague.

The competition, formerly known as the Fed Cup, was postponed in 2020 due to the COVID-19 pandemic. It means the Australian team last competed together in November 2019, when they faced France in the final at Perth.

“It’s been a while since our last tie,” said Priscilla Hon. “I’m super keen to get out there with the girls and be in a team environment again.”

The 23-year-old from Queensland, currently ranked No.215, lists being part of the Billie Jean King Cup competition as one of her biggest career highlights.

“It’s always one of the best weeks of the year,” Hon said.

“We’re all so supportive of each other,” said Gavrilova.

The 27-year-old Gavrilova is making her competitive return in Prague this week after recovering from Achilles surgery. The former world No.20 has not competed since Australian Open 2021.

Reuniting with her team-mates, as well as the extended Australian support staff, has been the biggest highlight so far for Gavrilova.

“I was really excited just to see everyone. Two of my team-mates (Storm Sanders and Ellen Perez) are actually bridesmaids for my wedding,” said Gavrilova, who is marrying fellow Australian player Luke Saville later this year.

Sanders has been recalled to the Australian team for the first time since 2014, rewarded for career-best seasons in both singles and doubles.

The 27-year-old, presently ranked No.120 in singles and No.33 in doubles, is confident they can challenge for the prestigious team title too.

“We have a really strong team with some great depth,” Sanders said.

“As a team, we want to try and finish top of our group to progress to the knock-out stages. The most important thing is trusting in the team and going out there to give it our best effort.”

Australia faces Belgium and Belarus in the round-robin stage at the Billie Jean King Finals, which run from 1-6 November. The group winner progresses to the semifinals.

In the competition’s new format, ties are played over a single day and consist of two singles and one doubles rubber.