Olivia Gadecki and Ellen Perez are proud to represent Australia at the Billie Jean King Cup for the first time. 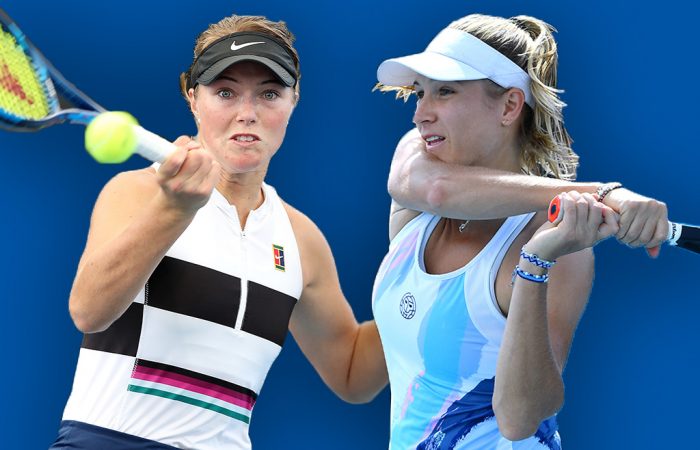 The countdown is on to the Billie Jean King Cup Finals, with Australia scheduled to play Belgium on 2 November.

“Making my Billie Jean King Cup debut is something I’ve dreamt of since I was a little girl,” said Gadecki, a promising 19-year-old from the Gold Coast.

“Growing up I was fortunate enough to get selected to play Junior Fed Cup, but to now play the real thing is something even more special. I can’t wait to be amongst the team of amazing fellow Aussies and compete my heart out while wearing the green and gold.”

Gadecki has enjoyed a stellar debut professional season, rising to career-high rankings of No.191 in doubles in September and No.232 in singles in October.

As an unranked wildcard at the Melbourne Summer Series in February, Gadecki stunned world No.4 Sofia Kenin. Since then, she has claimed two ITF titles and amassed almost 50 singles wins. She has also won five ITF doubles titles.

“Playing internationally this year has given me a huge boost in confidence when it comes to my tennis. It was one of the best decisions I ever made,” said Gadecki, who has been competing overseas since March.

“Coming into Billie Jean King Cup Finals I have no expectations, except to compete my hardest and enjoy the moment.”

Perez is also in exceptional form. The 26-year-old from Wollongong has won two WTA Tour doubles titles in 2021, including at Tenerife last week, and is currently ranked No.42 in doubles.

“It feels incredible to be able to represent Australia and wear the green and gold,” said Perez.

After making her Olympic debut in July and progressing to the doubles quarterfinals alongside Sam Stosur in Tokyo, Perez is thrilled to be achieving another long-held dream of representing Australia at the Billie Jean King Cup.

“I love being a part of a team environment, and especially when it’s with such a great group of girls like we have, so I’m really excited,” said Perez.

The Billie Jean King Cup Finals are played in Prague from 1-6 November.