Milestone US Open anniversaries for Sedgman and Emerson 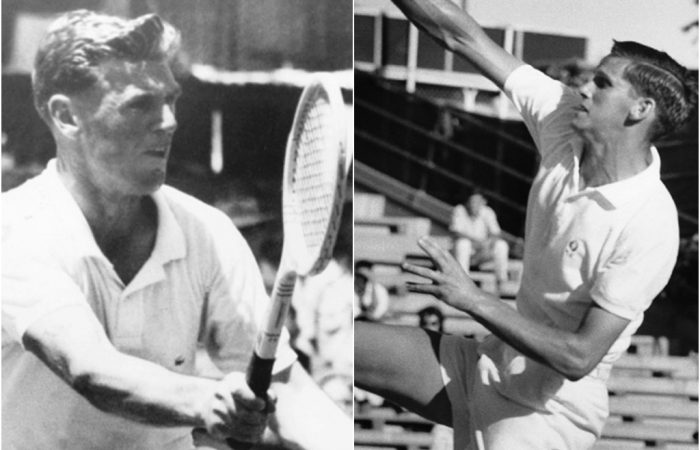 Former world No.1 and Hall of Famer Frank Sedgman lauds the Australian Open as one of tennis’ greatest success stories of the past century.

There is not much Sedgman – who this week is celebrated for his singles, doubles and mixed titles 70 years ago at the US Open – has missed in more than three quarters of a century of elite tennis.

He was one of Australia’s first genuine tennis superstars with 22 Grand Slam titles to his name – five in men’s singles – and outstanding service to the Australian Davis Cup team when the Americans were first tamed.

An original great of Australian tennis, Sedgman set a benchmark that many talented countrymen later emulated.

Roy Emerson also celebrates a special US Open anniversary in 2021. This year marks 60 years since the then-24-year-old defeated Rod Laver in one of 12 Grand Slams singles triumphs.

It was a second Grand Slam singles title for Emerson, who was also a winner of 16 Grand Slam doubles titles. The Queensland-born “Emmo” went on to thrive on all surfaces throughout his Hall of Fame tennis career.

Sedgman, 93, who remains close both to the international tennis community and local Melbourne clubs such as Kooyong and Grace Park, has certainly seen changes in tennis.

His rare feat at Forest Hill in 1951 – replicated at Wimbledon the following year – was followed by a long stint on the professional circuit before the Open era and he was one of the players returning to the Slams thereafter.

Post playing, he was instrumental in the development of Margaret Court’s career and always stayed close to the game, whether it was through his camps on the Gold Coast for the next generation of pros or through television commentary.

Sedgman witnessed the more from the US National Championships from Forest Hill to the loud Flushing Meadows in New York and the similar move away from Kooyong to Melbourne Park (initially Flinders Park) for the Australian Open.

But it has been the development of growth in the Australian Open that has caught his eye.

From being the small member of the Grand Slam events, it is now become a world class event few could have predicted when his career was winding down.

“Every player who plays wants to win the singles at Wimbledon, that’s always been the same,” Sedgman said. “But what’s happened is that the Australian Open has become such a big tournament now.”

Sedgman held an interest in Tennis Camps Australia, which was contracted to run the Australian Open for a period.

“(Former Tennis Australia president) Brian Tobin came in and said we were finished.

“But (former Tennis Australia President Brian Tobin and (then premier) John Cain picked out the spot where they have it now (Melbourne Park) and they’ve really done a great job with doing it up and putting all the extra things in for the children and the restaurants.

“Wimbledon officials come out here now and see what we’ve got in Australia and Wimbledon is starting to think that ‘we’ve got to do our place up now.’

“They’ve bought the golf course across the road and they’re looking at more attractions for the Wimbledon site.”

Sedgman understood and appreciated the move away from grass for the US and Australian Opens, as much as some of his most memorable feats were achieved were on that surface.

“Two weeks of grass, the baseline was nothing but dirt,” Sedgman said. “It wasn’t grass.

“They’ve found some type of grass that is a lot tougher now and Wimbledon will never change.

Sedgman should have been honored at the US Open this year, but travel restrictions amid the global pandemic made it problematic.

He’s hoping to pay a visit to Wimbledon next year, provided his legs will carry him.

Daily walks with wife Jean around their beachside home suggest he’s giving himself the best chance.

“My ambition now is that I don’t want to be in a wheelchair if I go back to Wimbledon,” Sedgman said. “I want to be able to walk and get around it a bit.”