Stosur and Zhang into US Open women’s doubles final

Australia's Sam Stosur and China's Zhang Shuai have progressed to the US Open 2021 women's doubles final. 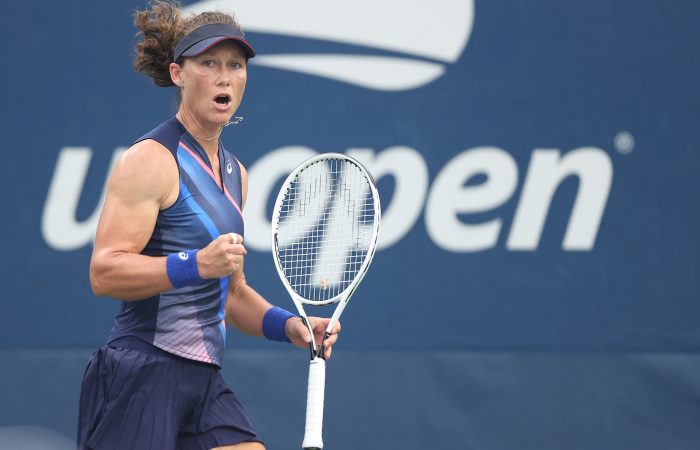 Thirteen years after her last appearance in a US Open women’s doubles final, Sam Stosur will once again challenge for the title.

The 37-year-old Australian and China’s Zhang Shuai have advanced to the women’s doubles final at this year’s US Open.

The No.14 seeds continued their impressive march through the draw, scoring a 6-2 7-5 victory against American Desirae Krawczyk and Chile’s Alexa Guarachi in the semifinals in New York today.

World No.55 Stosur and world No.27 Zhang combined to hit 26 winners in their 72-minute victory against the No.7 seeds. It is their fifth consecutive win this tournament in straight sets.

It extends Stosur and Zhang’s winning streak to 10 matches in total – and propels the Australian Open 2019 champions into their second Grand Slam final as a team.

This is the ninth women’s doubles final appearance of Stosur’s storied career – and her first at the US Open since a runner-up finish in 2008.

“To still be out here, having another chance with Shuai, is just incredible,” Stosur said. “I’ve had a great career, and to be in another Grand Slam final in New York is really, really exciting.”

Stosur, who won the US Open 2005 title alongside American Lisa Raymond, becomes only the fourth Australian in the Open era to reach three US Open women’s doubles finals.

Stosur and Zhang will play No.11-seeded American combination Coco Gauff and Caty McNally in the final.

Gauff was a one-year-old when Stosur won her first US Open women’s doubles title, highlighting the Australian’s incredible longevity.

In other US Open action today, Dylan Alcott progressed to the semifinals in the quad wheelchair singles competition with a comprehensive win against American wildcard Bryan Barten. Alcott dropped only a single game, keeping his hopes alive of achieving a Golden Slam.

However, Brit Andy Lapthorne proved too strong for Australia’s Heath Davidson in their quarterfinal clash. The two-time US Open champion scored a straight-sets win.