Three Australians are in action on day 12 of the US Open, including Sam Stosur in the women's doubles semifinals. 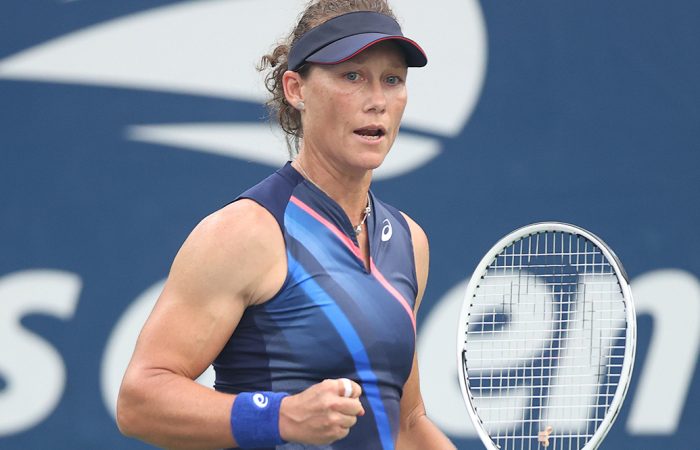 Sam Stosur has the chance to add to her impressive tournament record on day 12 of the US Open championships.

On the 10-year anniversary of her stunning singles triumph in New York, the 37-year-old Australian is competing in her sixth women’s doubles semifinal.

Stosur owns a 34-12 career win-loss record in US Open women’s doubles matches and is hoping to advance to a third final.

If she does, Stosur would become only the fourth Australian to reach three US Open women’s doubles finals in the Open era and join the esteemed company of Margaret Court, Wendy Turnbull and Ash Barty.

Stosur has already set a new Australian record by advancing to this year’s semifinals. It marks 16 years between her first and current US Open semifinal appearances, highlighting her incredible longevity.

Turnbull currently holds the Australian record for longest span between first and last US Open women’s doubles finals appearances at eight years – which Stosur could double, having made her first US Open final in 2005.

Stosur is not the only Australian looking to create history in New York, with Dylan Alcott continuing his quest to become the second player after Germany’s Steffi Graf to achieve a Golden Slam.

Alcott and Davidson are also teaming up in the quad wheelchair doubles semifinals.

Aussies in action on day 12:

[14] Sam Stosur (AUS)/Zhang Shuai (CHN) v [7] Alexa Guarachi (CHI)/Desirae Krawczyk (USA)
Women’s doubles, semifinals, Louis Armstrong Stadium, first match (from 2am AEST)
Stosur and Zhang have matched their career-best result as a team in New York, having also made the 2018 semifinals. The Australian Open 2019 champions are on a nine-match winning streak, which includes their title-winning run in Cincinnati last month, and have not dropped a set yet this tournament. Their opponents – Guarachi, a 30-year-old from Chile ranked No.16, and Krawczyk, a 27-year-old American ranked No.19 – are aiming to advance to their second major final as a team. The No.7 seeds were finalists at Roland Garros last year and have won two titles together this season.
Head-to-head record: First career meeting

[1] Dylan Alcott (AUS) v [WC] Bryan Barten (USA)
Quad wheelchair singles, quarterfinals, Court 12, first match (from 2am AEST)
Alcott’s first assignment in New York is to face world No.9-ranked Barten. The world No.1 defeated the 47-year-old American wildcard during his recent gold medal-winning run at the Tokyo Paralympic Games, losing only a single game in their quarterfinal clash. This is their fourth career meeting at the US Open, with 30-year-old Alcott winning each of their previous matches in straight sets. Alcott is aiming to win his third US Open singles title – and 15th major in total.
Head-to-head record: Alcott leads 5-0
Last meeting: Alcott won 6-0 6-1 (Tokyo, August 2021)

Heath Davidson (AUS) v Andy Lapthorne (GBR)
Quad wheelchair singles, quarterfinals, Court 14, first match (from 2am AEST)
Making his US Open debut, 34-year-old Davidson begins his campaign against world No.5 Lapthorne. They have played 11 times previously, with world No.7-ranked Davidson winning their most recent meeting at the Victorian Wheelchair Open in Melbourne in February. However, the 30-year-old Brit is difficult to beat at the US Open. He has produced his best tennis in New York, winning both of his Grand Slam singles titles (in 2014 and 2019) at the tournament.
Head-to-head record: Lapthorne leads 8-3
Last meeting: Davidson won 6-3 6-4 (Melbourne, February 2021)

[2] Dylan Alcott (AUS)/Heath Davidson (AUS) v Bryan Barten (USA)/Koji Sugeno (JPN)
Quad wheelchair doubles, semifinals, Court 12, third match
Alcott, who is ranked No.3 in doubles, and Davidson, ranked No.4, are making their first US Open appearance as a team. They have enjoyed Grand Slam success together, claiming four consecutive Australian Open titles between 2018 and 2021. Barten is ranked No.11 and is a three-time finalist in New York, while 40-year-old Sugeno is ranked No.7 and claimed a Paralympic Games bronze medal in doubles earlier this month.
Head-to-head record: First career meeting