Australia's Ajla Tomljanovic has advanced to the third round in the US Open women's singles competition for the first time in her career. 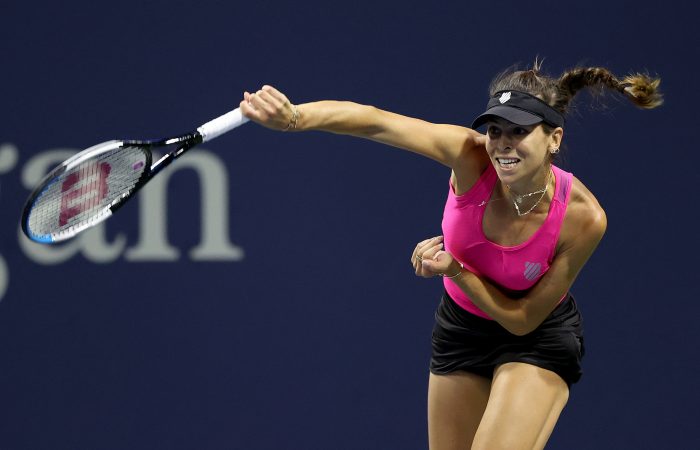 Ajla Tomljanovic has more new career-highs to celebrate, advancing to the third round at the US Open for the first time.

After her stunning Wimbledon quarterfinal breakthrough in July, the 28-year-old Australian is continuing that momentum in New York this week.

Her 98-minute victory against the world No.32-ranked Croatian is her first US Open main draw win against a seeded opponent.

Tomljanovic was forced to fight hard to secure victory, with both players struggling to maintain momentum in a tightly-contested match that ended after 11pm local time.

There were nine breaks of serve throughout the match. Tomljanovic converted five of the six break points she had, while Martic was left ruing missed opportunities after only winning four of her 11.

Martic also served for the opening set twice – but each time, the steely Tomljanovic broke.

“I felt like the match was a little bit ugly from both sides,” Tomljanovic admitted.

“I was happy to produce some good tennis when it mattered. I was down a break a few times in both sets and hung in there and the fact that I broke her a few times gave me confidence. I’m definitely happy that I got it done in a straight sets.”

Tomljanovic had entered the match with an 0-4 win-loss record in second-round matches at Flushing Meadows, having also made this stage of the tournament in 2013, 2017, 2018 and 2019.

But this time, Tomljanovic is moving onto the third round – where she will face fourth seed and recent Wimbledon finalist Karolina Pliskova.

The big-serving Czech owns a 5-1 career record against Tomljanovic, with the Australian’s only win coming in their first career meeting a decade ago.

World No.1 Ash Barty also advanced to the third round today, scoring a straight-sets win against Denmark’s Clara Tauson.

> READ: Barty moves into third round

While Australian players are shining on the doubles court, with eight recording wins in New York today.