Popyrin advances to US Open third round

Australia's Alexei Popyrin is through to the third round in the US Open 2021 men's singles competition. 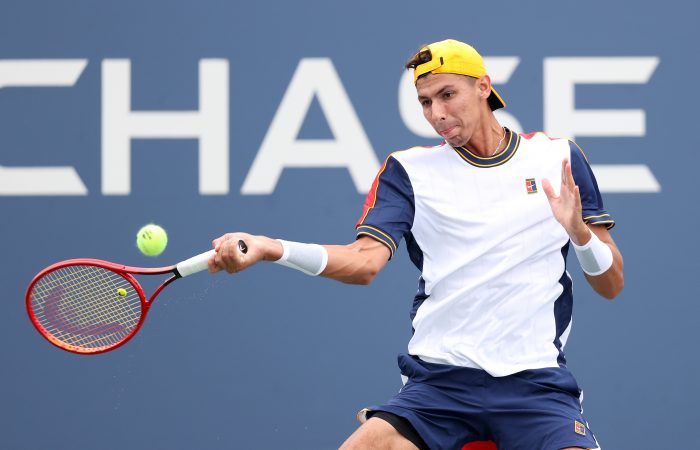 Alexei Popyrin has matched his career-best result at the US Open, progressing through to the third round.

Popyrin was in control of the match at that point – tallying 12 aces and winning 42 per cent of points on return. It had been a spirited effort from the world No.73, recovering from early breaks to win both the first and second sets.

But after two hours and 17 minutes on court, the 30-year-old Bulgarian was unable to continue due to a foot injury. It is the world No.18’s first mid-match retirement across his 11-year history at the tournament.

“It was a high-level match. He’s a really tough opponent to play but we came out with the right tactics and implemented them really well,” Popyrin said.

“He countered them quite well as well so I had to figure out a way in the first set how to get back from a break down. I’m just happy I was able to maintain that level over the course of the first two sets and then unfortunately he had to retire.”

The result counts as Popyrin’s fourth career top-20 win – and third achieved in a breakout 2021 season.

It is the fourth time in Popyrin’s career that he has reached the third round at a major tournament, having previously done so at the Australian Open in 2019 and 2020, as well as the US Open in 2019.

To advance to the fourth round for a first time, Popyrin will need to defeat No.24 seed Dan Evans in his next match. The 196-centimetre Australian has played the British world No.27 once before, losing to him in the opening round at the Queen’s Club tournament on grass earlier this season.

With doubles action beginning in New York on day three, a further 10 Australians were scheduled to compete. However, all these matches have been postponed and rescheduled due to inclement weather.