World No.1 Dylan Alcott and countryman Heath Davidson were each in dominant form as they secured quarterfinal appearances at the Paralympics. 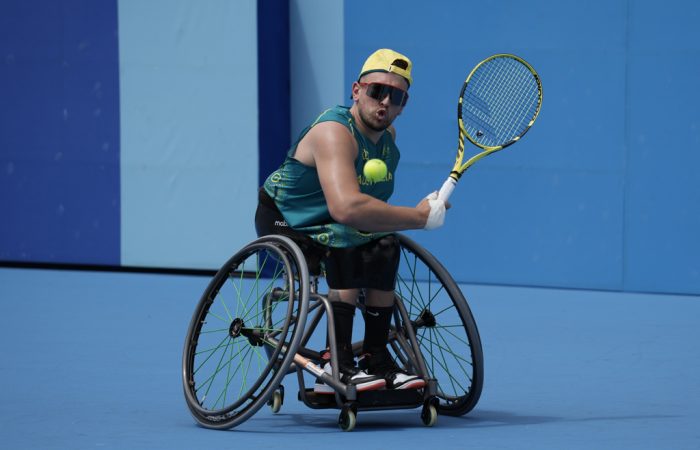 The quest to add to his Paralympics gold medal collection appears on track for Dylan Alcott, who made a perfect start to his quad wheelchair singles campaign in Tokyo.

The world No.1 Australia took 49 minutes to overcome Japan’s Mitsuteru Moroishi 6-0 6-2 at the Arieke Tennis Park.

“I’m stoked to get the win, stoked to be here,” said Alcott, relating how proud he is to represent Australia. “I love wearing the green and gold more than anything.”

Alcott secured the first set over the world No.11 Moroishi in 20 minutes and dropped only two games as he completed a  seventh straight match win against the 54-year-old.

The Australian was helped by 15 total winners compared to 11 from Moroishi and his 14 unforced errors were 10 fewer than the Japanese player recorded.

He will face either American or Bryan Barten or Korea’s Kyu-Seung Kim in the quarterfinals.

Alcott is defending his quad wheelchair singles gold medal from the Rio Paralympics in 2016, where he also combined with Heath Davidson to triumph in the doubles.

The 30-year Melburnian is also a gold medallist in basketball, after winning with the Australian Boomers team at the Beijing Paralympics in 2008.

Extreme heat again delayed play in Tokyo, with the Australian taking to Centre Court after 8pm local time – not that Alcott was complaining.

“I feel very lucky to be here at the moment with everything going on in the world so I’m just trying to enjoy it. It’s a beautiful stadium, I was trying to take it all in,” he related.

“I don’t know how many times you’re going to play on a Centre Court, especially at the Paralympics.”

Davidson added to the good news for Australia in Tokyo, the 34-year-old dropping just one game as he defeated Great Britain’s Antony Cotterill in 45 minutes.

“(I’m) really pleased,” Davidson said of his 6-1 6-0 victory. “I was very nervous actually, going into that one. It hit me about 10 minutes before I went on court.

“But I stuck to my guns, played my game and hit the ball pretty clean and got the job done, which is the main thing.”

Davidson, who will meet either Yosi Saadon of Israel or Dutch No.2 seed Sam Schroder in the quarterfinals, was especially pleased that his preparation paid off in testing Tokyo conditions.

“It’s really good to be underway now, obviously we’ve been here for a week and training was great and getting used to the climate over here,” he said.

Martyn Dunn and Ben Weekes exited the men’s doubles in Tokyo, with Gustavo Arneiro Silva and Daniel Rodrigues of Brazil claiming a 6-2 6-3 win.

Weekes, who is contesting a record fifth Paralympic Games, won his first-round singles match against Israel’s Adam Berdichevsky yesterday and meets Jen Vandorpe in the second round.