Australian Sam Stosur has captured her 27th career doubles title - and first since January 2019 - with China's Zhang Shuai in Cincinnati. 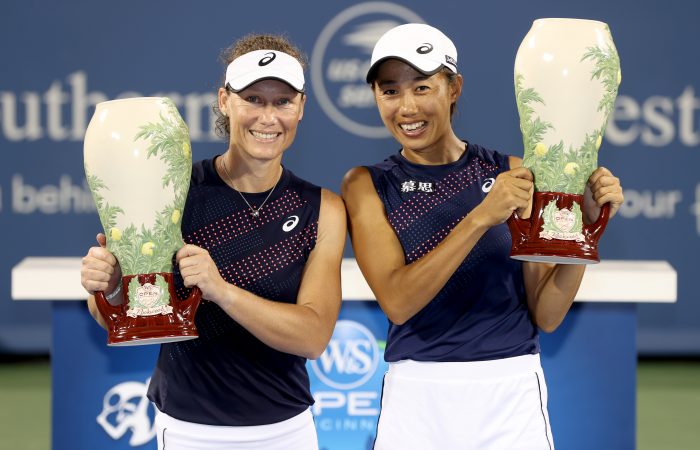 The duo scored an impressive 7-5 6-3 victory against No.6 seeds Gabriela Dabrowski of Canada and Luisa Stefani of Brazil in today’s final.

After winning three-set battles in each of their four previous matches this tournament, they saved their most consistent performance of the week for the championship match.

The close friends, who were playing together for the first time since February, showed incredible spirit to recover from early breaks in both sets.

Stosur sealed the 82-minute victory, and secured their third team title, with an ace.

“I missed being out here with you,” Stosur said to Zhang during the trophy presentation. “Thanks for joining up again. You wanted the big trophy and now we’ve got it.”

It is a drought-breaking performance from Stosur, who becomes the first Australian woman to claim the Cincinnati doubles title since Evonne Goolagong Cawley and Margaret Court combined to win the tournament in 1972.

It is the 37-year-old’s 27th career tour-level doubles title in total – and first since winning the Australian Open alongside Zhang in 2019.

Currently ranked No.96 in doubles, Stosur is now projected to return to the world’s top 60 after her title-winning run.

Barty scored a 6-2 7-5 win against former world No.1 Angelique Kerber in the semifinals and now plays Swiss wildcard Jil Teichmann for the title.