Australian mixed doubles bronze medallists John Peers and Ash Barty are cherishing every moment of their shared success at the Tokyo Olympics. 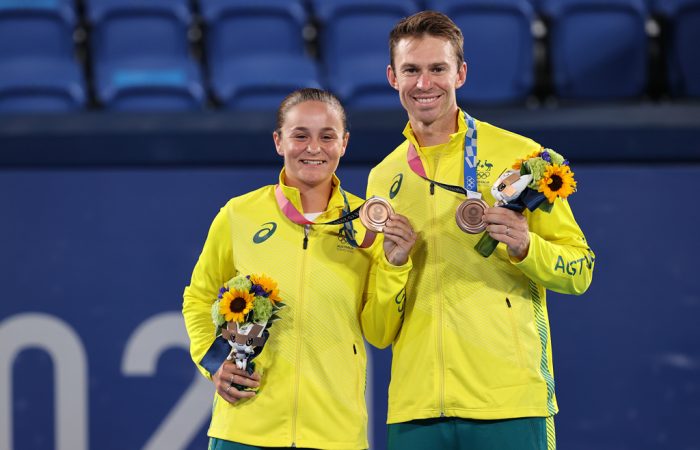 Major doubles highs are not new for Australians John Peers and Ash Barty.

Peers is the Australian Open men’s doubles champion with Henri Kontinen, while Barty claimed the 2018 US Open women’s doubles with America’s Coco Vandeweghe. Both have also finished runner-up in other Grand Slam doubles events on multiple occasions.

But for the passionate team players, nothing compared to the feeling of winning an Olympic bronze medal for Australia.

Peers and Barty were yesterday announced the winners of the mixed doubles bronze medal play-off, becoming the first Australian players to medal in that format.

Securing Australia’s sixth ever medal in tennis, Peers and Barty were the first Australian players to achieve a podium finish since Alicia Molik won a singles bronze medal at the Athens 2004 Olympics.

“It’s been an amazing week for both John and I,” a proud Barty told Channel 7’s Sunrise program. “We’ve played some great tennis, probably the best we’ve ever played together. To walk away with a medal and contribute to the team total here in Australia has been incredible.”

Peers, who had combined with Barty to reach mixed doubles quarterfinals at 2013 Wimbledon and the 2014 US Open, echoed that sentiment.

“Any chance you get to represent your country and to do it alongside Ash, to be able to say we’re the first mixed doubles medallists at an Olympics for Australia is something really special,” the 33-year-old added.

Australia’s medal finish occurred in unusual circumstances. Scheduled to face Serbian team Novak Djokovic and Nina Stojanovic last night, Peers and Barty were awarded a walkover victory when Djokovic withdrew ahead of the play-off match with a shoulder injury.

Not that it detracted from a stellar overall performance from Peers and Barty. The Australians kicked off their mixed campaign with a straight-sets win over Argentina’s Horacio Zeballos and Nadia Podoroska, before victory over Greek No.2 seeds Stefanos Tsitsipas and Maria Sakkari.

They came within a whisker of progressing to the final, holding a match point in the super tiebreak of the quarterfinal against Russian Olympic Committee representatives Andrey Rublev and Anastasia Pavlyuchenkova, who went on to defeat compatriots Aslan Karatsev and Elena Vesnina in the final.

“Johnny and I, we put ourselves in a position all week to play good tennis and I feel like we really deserve this one,” said Barty. “We were so close to being in that gold medal play-off and I think for both of us, it’s been awesome. We’ve played great. I felt like we really deserved this one for Australia.”

All of Australia is proud of you both 👏#Tokyo2020 | #7Olympics pic.twitter.com/KApiJGdIDv

With Olympic success following so closely to Barty’s second Grand Slam singles triumph at Wimbledon just weeks ago, it seems natural to wonder if the Queenslander feels the weight of expectation – particularly as many Australians grapple with challenges arising from the pandemic.

“No, I think for us it’s excitement,” the 25-year-old smiled, noting the many sacrifices required to perform at this level.

“I just hope as athletes, as a whole Australian team that’s here – all 480 odd of us – we can bring a smile to people’s faces at home when they’re sitting on the couch enjoying watching us trying (to) go out there and do Australia proud.

“I think we come here with the focus in mind to bring medals back home for Australia and I’m really proud of Johnny and I that we were able to do that.”

Peers takes inspiration from a unique spirit demonstrated in Tokyo.

“There was so much uncertainty leading into the Games and to be able to see the way the Australian team’s come together and sort of really bonded has really shown the Australian spirit, the way that all the athletes get behind each other,” he commented.

“To be able to show the Olympics is going on in uncertain times is just something really special and unique and hopefully it can be the turning point for the world, and Australia, to come out the other side.”

The Australian players will soon be bound for America, where the summer hard-court season culminates with the US Open.

But bronze medals in hand, Peers and Barty were determined to first cherish every moment of their once-in-a-lifetime Olympic milestone.

“It’s important for us to take some time now to celebrate what John and I have achieved because it’s just absolutely incredible,” said Barty. “It’s a dream come true for both of us.”