Australia’s Ash Barty and John Peers have earned a place in the mixed doubles bronze medal play-off at Tokyo 2020. 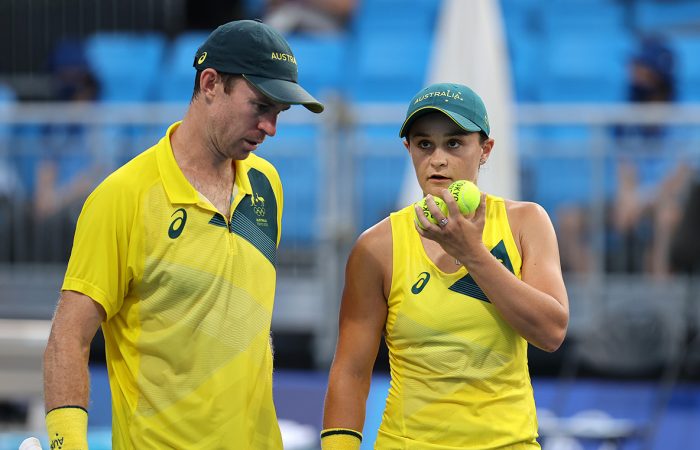 Ash Barty and John Peers’ dream of winning Australia’s first Olympic gold medal in mixed doubles is over – but they are still a chance to claim a bronze medal.

Fourth seeds Anastasia Pavlyuchenkova and Andrey Rublev, who are representing the Russian Olympic Committee, scored a 5-7 6-4 [13-11] victory in the semifinals of the Tokyo 2020 mixed doubles competition.

This evening’s result relegates 25-year-old Barty and 33-year-old Peers to a bronze medal play-off, where they will play Novak Djokovic and Nina Stojanovic from Serbia.

There was only a single break in a tight opening set, with the Australians striking in the 12th game to win Pavlyuchenkova’s serve and take a one-set lead.

Pavlyuchenkova and Rublev edged ahead early in the second set, breaking Barty’s serve and then saving two break points on Pavlyuchenkova’s serve to build a 3-1 lead.

The momentum was quickly changing, with Peers’ losing his serve to give Pavlyuchenkova and Rublev a double-break advantage.

But from a 1-5 deficit, the Australians reeled off three consecutive games to remain in the set.

Rublev halted Barty and Peers’ charge though, holding serve to send the semifinal into a deciding match tiebreak.

The Australians had a match point in the match tiebreak – but it was Pavlyuchenkova and Rublev who secured a hard-fought victory in a high-quality one-hour and 41-minute battle.

“This one hurts, but we still have an opportunity to play another match and try to win a medal for Australia. We pick ourselves up pretty quickly, move on and know that we will give it our all and keep fighting right until the end,” Barty said.

“You never know in sport, anything can happen, so we’ll just keep chipping away and keep trying to play our brand of tennis and keep giving ourselves the opportunity.

“It’s been quite a while since we’ve had an Australian medallist here (in tennis) at the Olympics so we’re looking forward to that challenge.”

Barty and Peers had been aiming to become the first Australian tennis players to progress to an Olympic gold medal play-off since Todd Woodbridge and Mark Woodforde collected silver in the men’s doubles competition at Sydney 2000.

They could still join an exclusive group of Australian tennis players to claim an Olympic medal and become the nation’s first players to win a mixed doubles medal.

Barty and Peers are also hoping to become the first Australians to win an Olympic tennis medal since Alicia Molik claimed bronze in the women’s singles competition at Athens 2004.

The bronze medal play-off is the second match scheduled on Court 1 tomorrow, where plays begins at 4pm AEST.