Barty and Peers excited to challenge for Olympic medal

Ash Barty and John Peers reflect on their semifinal run in the mixed doubles competition at the Tokyo 2020 Olympic Games. 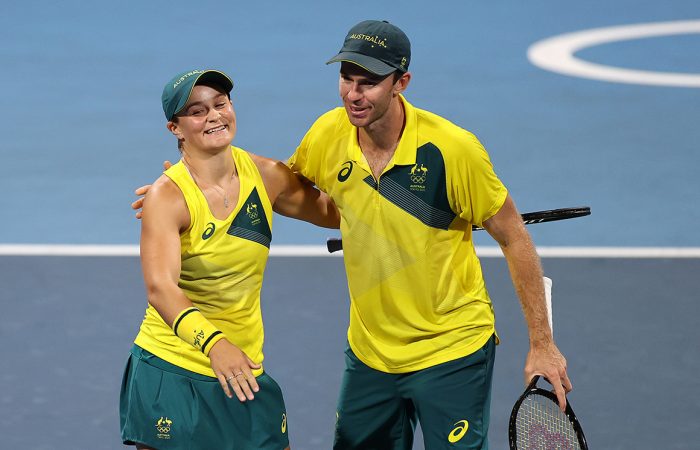 Ash Barty and John Peers are on the verge of creating history as the first Australian tennis players to win an Olympic medal in mixed doubles.

They have progressed to the semifinals in Tokyo and today play for a place in a gold medal play-off.

If they defeat fourth seeds Anastasia Pavlyuchenkova and Andrey Rublev, who are representing the Russian Olympic Committee, they are guaranteed to claim either gold or silver.

If they lose, they will compete in a bronze medal play-off.

“It’s exciting and it’s why we came here,” Barty said.

“The whole tennis team, the whole Team Australia, that’s why we came here, to try and win medals for our country. To now be in that position is a lot of fun. I’m super proud of our week so far, but we’re certainly not done yet.”

That was won by Alicia Molik, who claimed bronze in the women’s singles competition at Athens 2004. Molik is in Tokyo this week, leading the Australian women’s team.

The last time an Australian tennis player featured in an Olympic gold medal play-off was at Sydney 2000, when Todd Woodbridge and Mark Woodforde took silver in the men’s doubles competition.

Peers, who turned 33 this week, lists watching the Woodies compete in Sydney as one of his all-time favourite Olympic memories.

With just a few hours to go until #Tokyo2020, our Aussie players look back at their favourite Olympic moments ✨#TokyoTogether @AUSOlympicTeam pic.twitter.com/jCfS6Oz8E9

While recognising the opportunity they have to create their own incredible Olympic moment, Peers is determined not too put too much pressure on themselves in today’s semifinal.

“Ash and I just came out here to have a lot of fun, and see how the results can be,” he said.

“Let’s see if we can produce another good match. At the end of the day, we have been playing a good level … There’s no reason we can’t have another good day.”

Barty and Peers’ mixed doubles semifinal is the second match scheduled on Court 1 today, with play beginning from 4pm AEST.