Jordan Thompson progresses to the quarterfinals of the Hall of Fame Open in Newport, while Astra Sharma maintains impressive momentum in Lausanne. 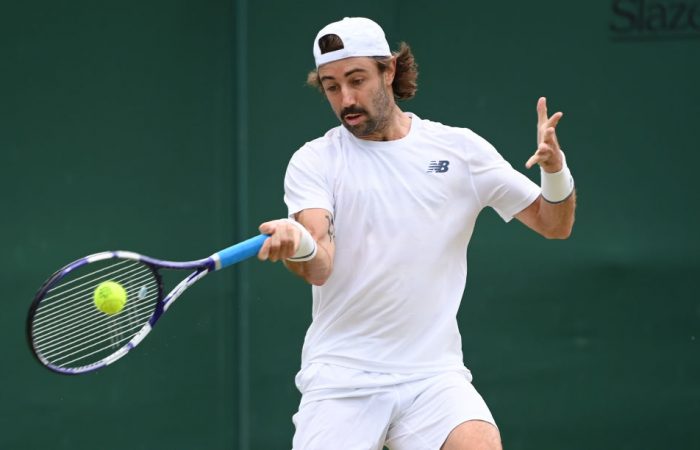 Jordan Thompson dropped just two games as he secured a quarterfinal place at the Hall of Fame Open in Newport, the Australian overcoming Yuichi Sugita 6-0 6-2 at the grass-court event.

It took Thompson an hour and 18 minutes to overcome his world No.111 opponent and progress to a third ATP-level quarterfinal this year.

The 71st-ranked Sydneysider fired eight aces and defended both breakpoints that he faced.

He next faces Maxime Cressy, a world No.155 American who upset No.2 seed Sam Querrey in three sets.

It was a reversal of the pair’s first-round match at Wimbledon, when the Czech claimed a three-set win.

The Australian fired 10 aces in her latest meeting with Pliskova to set up a meeting with No.5 seed Caroline Garcia.

A qualifier in Lausanne, Sharma is aiming to progress to a third 2021 quarterfinal.

The world No.128 Sharma enjoyed a career breakthrough earlier this year in Charleston, where she defeated Ons Jabeur in the final to lift a WTA trophy for the first time.

John Millman has bowed out of the Nordea Open in Bastad, Sweden, the Australian exiting to Arthur Rinderknech in three sets.

Rinderknech, a French qualifier, required a two hours and 13 minutes to claim a 6-3 3-6 6-3 win over Millman, who was the tournament’s No.4 seed.

Storm Sanders has progressed to the doubles quarterfinals of the Livesport Prague Open alongside American partner Asia Muhammad.

It was unfortunately at the expense of another Australian, with the pair overcoming Sam Stosur and Brit Jodie Burrage in three sets.

Sanders will tonight meet Nuria Parrizas Dias in the second round of the singles event after an earlier upset of No.4 seed  Marie Bouzkova in three sets.

The 26-year-old Sanders currently sits at a career-high singles ranking of No.141.