Ash Barty’s rise to become a Wimbledon champion is no surprise to delighted predecessor Evonne Goolagong Cawley and her proud parents Robert and Josie. 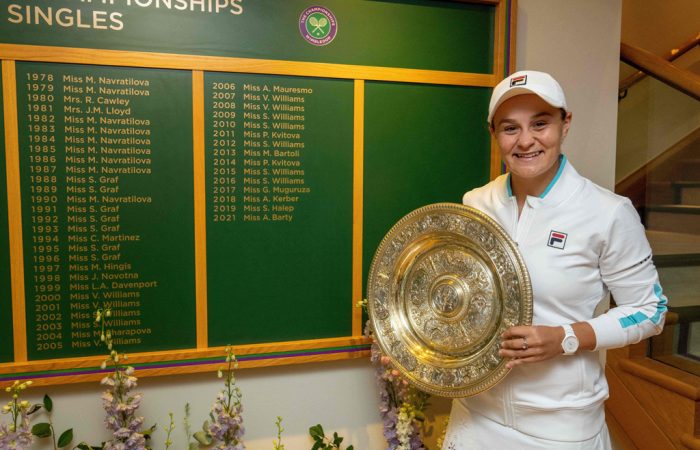 With tears of frustration from earlier injury problems turned to tears of joy as a Wimbledon singles champion, Ash Barty paused for a moment to consider the esteemed company she now occupied.

“You see the names here. You see how much this this specific event has meant to tennis and to our sport and now to kind of write my own little story, my little piece of history is really cool,” said the world No.1, who overcame Karolina Pliskova in a three-set final.

No names on the All England Club’s Roll of Honour resonate more with Barty than Evonne Goolagong Cawley.

The last Australian woman to triumph at Wimbledon – doing so in 1971 and 1980 – the former world No.1 is also Barty’s long-time friend and mentor.

In the footsteps of her hero 💚 ✨#Wimbledon pic.twitter.com/vCwcd3pBlh

Barty, wearing a bespoke outfit to honour the 50th anniversary of Goolagong Cawley’s first Wimbledon triumph, was overwhelmed when asked to comment on honouring her fellow Australian.

“I hope I’ve done Evonne proud,” the tearful No.1 managed, her voice cracking as an adoring Centre Court crowd applauded their agreement.

There could be no questioning how much it meant to Goolagong Cawley as she watched from her home in Noosa.

“She certainly did (make me proud),” beamed the Queenslander of Barty’s Wimbledon breakthrough, while also noting that this had long been true of her young compatriot.

“She made me proud from the first time I first saw Ash. She must have been about 13 and it was at the Australian Open.

“We saw one whole game where she showed all the skills. She did the slice, the volley, the smash. Everything in one game.

“(My husband Roger and I) both just looked at each other and said, ‘she’s going to be our next champion’. Look at her now.”

While relating to the emotion that was clear from Barty, the delighted Goolagong Cawley also noted how it was more fraught to watch from Australia.

“Everybody reacts differently, I think, after they win Wimbledon for the first time, it didn’t hit me till later on because you actually turn numb. You’re in shock, just as Ash was at the end.”

Watching Barty compete in the final provided Goolagoing Cawley with a realisation of her own family’s experience. “They were jumping up crying and screaming, exactly what we were doing!” she laughed.

It also underlined the depth of the connection that Goolagong Cawley feels with the younger champion.

“Ash to me is like a little sister and part of my family,” she said, explaining her pride in Barty’s ability to manage any situation – be that on Centre Court at the All England Club or elsewhere

“I’m just so very proud of Ash, the way she handles herself, not just on the court but off the court too,” she said.

"I hope we can pave the path for next generations coming through.”

Following the path of Evonne Goolagong Cawley at #Wimbledon and set to make history at the Tokyo Olympics, Ash Barty is adding special significance to #NAIDOCWeek https://t.co/L3rdNfoRMQ

There were many such moments as Barty completed her Wimbledon-winning campaign, which added to a remarkable synergy between the two women.

Like 2019 Roland Garros champion Barty, Goolagong Cawley claimed her first Grand Slam title in Paris and next added to their major trophy collection at Wimbledon.

And like Barty, Goolagong Cawley discovered the power of articulating a dream to win at Wimbledon. The 69-year-old sent a text message to Barty with exactly that advice ahead of the final.

“I think once you start verbalising it, then things happen, dream, do come true,” said Goolagong Cawley.  “And that’s one of the last messages I sent her. I said dreams, do come true. It came true for me.”

Acknowledging the hard work and commitment their daughter had demonstrated to achieve her dream to become a Wimbledon champion, the Bartys are prouder still of how she’s evolved as a person.

“She’s such a lovely girl. She’s a wonderful human being, she cares deeply for her sisters and her mother. She wants to speak to them every day and that makes me so, so proud of her,” said Barty’s father, Robert.

“I’m just proud of how she treats everybody,” added her mother, Josie. “She’s still the same person, regardless of the tennis. She’s just amazing.”