From political leaders to entertainment stars, fellow sports heroes and other players, congratulations are flowing for Wimbledon champions Ash Barty and Dylan Alcott. 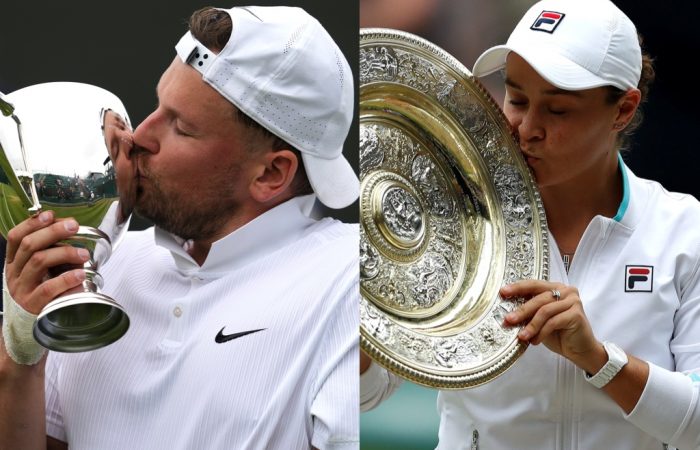 No sooner had Dylan Alcott and Ash Barty lifted silverware at the All England Club than the accolades started flowing for the Australian champions.

Offering encouragement for Alcott to pursue ‘the Golden Slam’, the Prime Minister acknowledged Barty for inspiring other Australians.

Congratulations @DylanAlcott on winning your second #Wimbledon title. Truly extraordinary. On to Tokyo for the ‘golden slam’. https://t.co/v7SW1UE7SP

The whole country celebrates with you.

Enjoy this moment you’ve worked so hard for, for so long. https://t.co/3FSwvMr8ns

As did Hollywood star Hugh Jackman:

A champ on and off the court.

This is a moment that EVERY Aussie tennis player dreams of. A massive massive congrats to @ashbarty on giving all the young kids in Australia a vision of what their future could be!!! @Wimbledon champion pic.twitter.com/7KMyZ7WnbK

Stars from other sports appreciated the enormity of Alcott and Barty’s Wimbledon milestones.

Massive pride in our girl! Congratulations @ashbarty! We are all so very proud of you. #Wimbledon pic.twitter.com/WToQZQpkwj

There were poignant words from Simona Halep, who was unable to defend her 2019 Wimbledon title due to injury.

But it was fellow Australian players who were arguably most excited for the champions.

No words! So proud https://t.co/yFYWtObp7G

Alcott and Barty had earlier showcased the camaraderie that helps inspire each other’s Grand Slam progress.