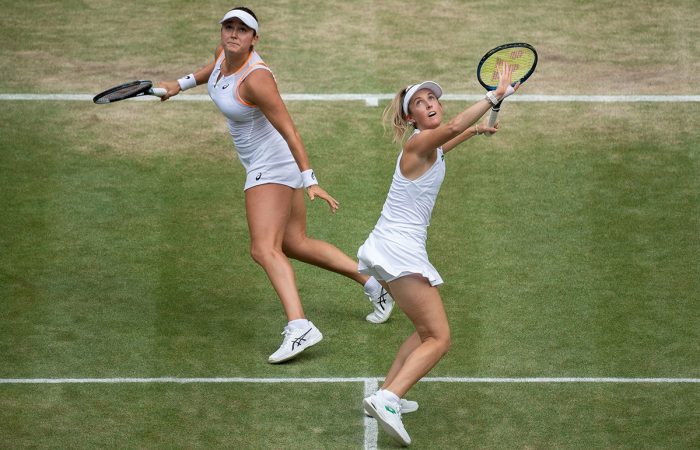 Storm Sanders got within one point of earning a place in the Wimbledon ladies’ doubles final – but it wasn’t to be.

Sanders and her American partner Caroline Dolehide were unable to convert three match points in their semifinal today against Elena Vesnina and Veronika Kudermetova, with the Russian duo recovering from a 2-5 deficit in the deciding set to record a hard-fought 7-6(6) 3-6 7-5 victory.

The 22-year-old Dolehide was broken to love while serving at 5-3 in the third set – however with some brilliant returning from Sanders, they earned three match points on Kudermetova’s serve in the next game.

But the 24-year-old Russian held under enormous pressure and from there, Kudermetova and Vesnina maintained their momentum to seal victory after two hours and 29 minutes on court.

World No.59 Sanders, who had never previously progressed beyond the second round in a Grand Slam ladies’ doubles draw, had been aiming to become the 13th Australian to reach a Wimbledon ladies’ doubles final in the Open era.

Two of the previous Aussie players to achieve this feat – Sam Stosur and Rennae Stubbs – were courtside today cheering on 26-year-old Sanders at the All England Club.

Despite the heart-breaking loss, Sanders can take many positives from her efforts this fortnight. She will be rewarded in the rankings too and is projected to improve to a new career-high inside the world’s top 50.