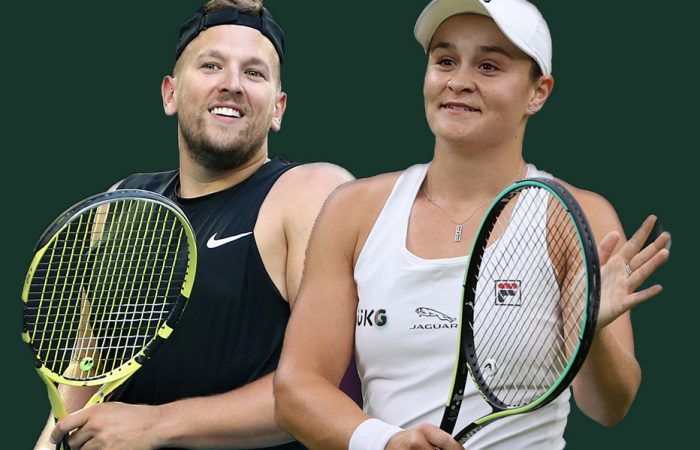 Ash Barty is not taking the opportunity to compete at Wimbledon for granted.

“I’ve just got a whole lot of gratitude for the fact that I get to come out here and do what I love. The world, the way we’re living at the moment, I think it’s incredible that we’re able to play, compete, have people enjoy it with us. So I’m certainly enjoying every single minute that I get out on those courts.”

Contesting her first singles semifinal at the All England Club today, Barty has the chance to become just the fourth Australian in the Open era to advance to a Wimbledon ladies’ singles final and the first since her mentor Evonne Goolagong Cawley in 1980.

Dylan Alcott is also hoping to create history as he begins his title defence in the quad wheelchair singles competition today.

The world No.1 is looking to win his 14th major singles crown and complete the third leg in his quest for an unprecedented calendar-year Grand Slam in the quad wheelchair division.

[1] Ash Barty (AUS) v [25] Angelique Kerber (GER)
Ladies’ singles, semifinals, Centre Court, first match (from 10.30pm AEST)
This is Barty’s fifth career meeting with Kerber, a three-time major champion and former world No.1. “Each time I’ve played Angie has been through different phases of my career,” Barty says. “It’s been an exceptional challenge each and every time. Now to be facing each other in a Grand Slam semifinal in a tournament she’s won before is an incredible opportunity. I’m really, really excited.” Both players feel comfortable on grass, yet possess very different game styles. “I like to try and use my variety as best I can. I like to use my weapons when I can,” Barty notes. “I know one of Angie’s greatest assets is the fact that she can run and hunt and put the ball in an awkward situation to nullify my aggression and my weapons.” It sets the scene for what shapes as an enthralling battle – and one with a major prize, a place in the Wimbledon final, on the line.
Head-to-head record: Tied at 2-all
Last meeting: Barty won 7-5 6-1 (Wuhan, September 2018)

[17] John Peers (AUS)/Zhang Shuai (CHN) v [4] Edouard Roger-Vasselin (FRA)/Nicole Melichar (USA)
Mixed doubles, quarterfinals, No.1 Court, second match
This is Peers’ second Wimbledon mixed doubles quarterfinal appearance, having also reached this stage in 2013 with a teenage Ash Barty. Eyeing a first semifinal, the 32-year-old Australian and Chinese partner Zhang face the No.4 seeds. Roger-Vasselin is ranked No.15 and Melichar is the world No.9. Peers, ranked No.24, has made one mixed doubles semifinal in his career – at the US Open in 2018, alongside the No.48-ranked Zhang.