Ash Barty has continued her career-best Wimbledon run to defeat Ajla Tomljanovic in the first all-Australian ladies' singles quarterfinal at the tournament in 41 years. 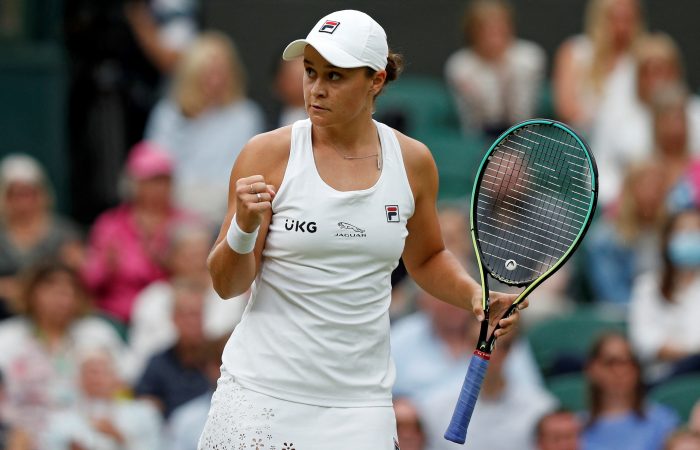 The world No.1 recorded a 6-1 6-3 victory against fellow Australian Ajla Tomljanovic to advance to her first semifinal at the All England Club.

“This is a dream come true. Genuinely, it is,” Barty said. “This is my dream and I’m extremely grateful that I’ve got an opportunity to come out here, have fun and live out what I work so hard to do. I’m loving and enjoying every minute.”

Tomljanovic, playing on Wimbledon’s famous Centre Court for the first time in her career, made a composed start and held to love in the opening game.

But it did not take long for the top-seeded Barty to strike, breaking Tomljanovic’s serve in the third game and consolidating to move ahead 3-1.

From there, a confident Barty raced through the opening set in 24 minutes.

With seven winners to Tomljanovic’s one, Barty was dictating play – especially on serve, conceding only three points.

“The match-up felt really bad from my side,” Tomljanovic admitted. “Felt like she was neutralising my serve with the slice, which kind of set the tone for me and made me really uncomfortable because it was hard to break her. She was serving great, and the slice was just really hard to deal with today.”

World No.75 Tomljanovic, contesting her first major quarterfinal, halted Barty’s run of six consecutive games to break in the opening game of the second set. But Barty immediately broke back, refusing to let Tomljanovic build any momentum of her own.

From 1-4 down in the second set, a gritty Tomljanovic won two games in a row to heap some pressure on Barty.

However, the world No.1 had too many answers. Barty broke in the eighth game and then served out victory after 66 minutes on court.

“Today I was able to use my weapons a little bit better and just bring the ball back into my patterns a bit more regularly. I certainly wasn’t as loose as I have been with errors and kind of ill-timed lapses,” Barty said, comparing her form to earlier in the tournament. “I felt really sharp.”

“Ajla is an incredible competitor. I’ve practised with her a lot, played with her as Fed Cup teammates. She was always going to bring out the very best in me,” Barty said.

“I had to play my absolute best to be able to compete with her. She’s had an incredible fortnight and I think all Aussies back home are bloody proud of her. It was really nice to share the court with her today.”

Barty joins elite company as the sixth Australian to reach a Wimbledon ladies’ singles semifinal in the Open era – and the first since Jelena Dokic 21 years ago.

It is Barty’s third career Grand Slam semifinal appearance, having also made the final four at Roland Garros in 2019 and Australian Open 2020.

The 25-year-old from Queensland plays world No.28 and Wimbledon 2018 champion Angelique Kerber in the semifinals. Barty’s head-to-head record against the 33-year-old German is tied at two-all, with their last meeting in 2018.

“It is the ultimate test. Angie’s obviously had success here before and had the best fortnight here possible,” Barty said. “I love that match-up, I love playing Angie. She is an incredible competitor and she knows her way around this court. I hope I can play well and give myself a chance.”

Barty is aiming to become the fourth Australian to reach a Wimbledon ladies’ final in the Open era and the first since Evonne Goolagong Cawley’s 1980 triumph.

With rain interrupting play on the outside courts today, Barty and Tomljanovic’s showdown is the only completed match featuring Australian players so far on day eight.