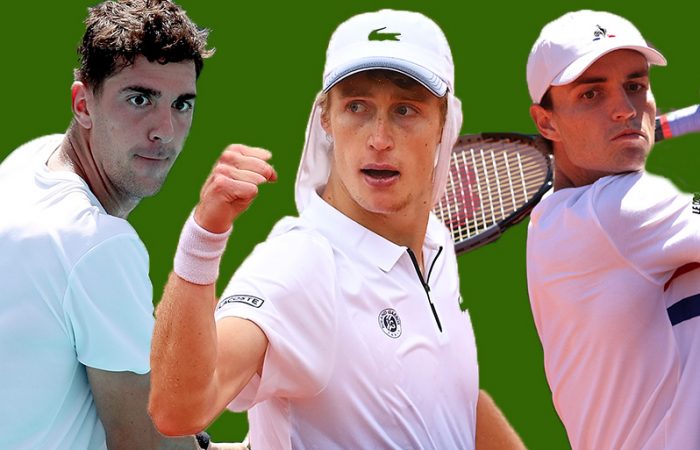 The Wimbledon 2021 gentlemen’s singles qualifying draw features six Australians, all who are aiming to earn a coveted main draw spot at the grass-court Grand Slam.

Chris O’Connell, 26, New South Wales
Competing at Wimbledon for the first time in his career adds to some impressive season highlights for O’Connell, who recorded a maiden top-50 win to reach the Australian Open second round and also made his Roland Garros main draw debut. An ankle injury derailed the world No.131’s first tour-level appearance at a grass-court tournament in Stuttgart earlier this month, but he bounced back to make the final qualifying round in Halle last week. Seeded No.16, O’Connell faces Slovakian Filip Horansky in the opening round. It will be his first career meeting against the world No.181.
Wimbledon career record: 0-0 (0-0 in qualifying)
Wimbledon best result: Making debut

Marc Polmans, 24, Victoria
Contesting Wimbledon qualifying for the fourth time in his career, Polmans is looking to earn a main draw debut. The world No.154, who made the final qualifying round at Roland Garros last month, knows how to produce his best tennis at Grand Slam level. Although Polmans has only won one of his past seven singles matches on grass, he can take confidence from winning an ATP Challenger doubles title last week. The No.32-seeded Polmans plays world No.237 Borna Gojo in the first round. The 23-year-old Croatian won their only previous meeting in 2019.
Wimbledon career record: 0-0 (1-3 in qualifying)
Wimbledon best result: Qualifying second round (2019)

Thanasi Kokkinakis, 25, South Australia
In his first grass-court match in almost three years, Kokkinakis pushed world No.27 Dan Evans to three tight sets earlier this month. It showcased the potential of the world No.182, who is aiming to qualify at Wimbledon for a first time. He has played Wimbledon qualifying once before, advancing to the final round in 2018. Towering No.30 seed Maxime Cressy, a 24-year-old American standing at 198 centimetres tall, is his first-round opponent. Kokkinakis beat the world No.151 in straight-sets on hard court in 2019 in their only previous meeting.
Wimbledon career record: 0-2 (2-1 in qualifying)
Wimbledon best result: First round (2015, 2017)

Aleksandar Vukic, 25, New South Wales
Making his Wimbledon debut, Vukic’s impressive form suggests he is one to watch. The world No.209 has qualified for two grass-court tournaments already this month and tested world No.14 Denis Shapovalov at Queen’s last week, which was only his second professional tournament on grass. Vukic, who boasts a solid 7-3 career record in Grand Slam qualifying matches, plays 19-year-old American Brandon Nakashima in the first round. It is his first meeting against the world No.138, who is the No.22 seed and also contesting Wimbledon for a first time.
Wimbledon career record: 0-0 (0-0 in qualifying)
Wimbledon best result: Making debut

Bernard Tomic, 28, Queensland
It has been 10 years since Tomic made a sensational quarterfinal run at the All England Club as a No.158-ranked qualifier. The former world No.17 boasts an exceptional Wimbledon record, where he has made 10 main draw appearances and scored four top-20 wins. This is the fifth time Tomic has contested qualifying at the tournament. He has made the final round in each of his previous qualifying appearances, earning main draw spots in 2010 and 2011. Tomic faces world No.216 Blaz Kavcic in the first round. Tomic, who is currently ranked No.224, owns a winning record against the 34-year-old Slovenian.
Wimbledon career record: 14-10 (10-2 in qualifying)
Wimbledon best result: Quarterfinal (2011)

Matthew Ebden, 33, Western Australia
Ebden scored his career-best Grand Slam singles result at Wimbledon in 2018, defeating world No.9 David Goffin in a third-round run. The world No.238, who lists grass as his favourite surface, is aiming to make a seventh main draw appearance at Wimbledon. Ebden has contested qualifying at the tournament twice before, but not since 2011. His first-round opponent is world No.159 Sebastian Baez. Ebden will look to take advantage of his edge in experience in a first career meeting against the 20-year-old from Argentina, who is competing at Wimbledon for the first time.
Wimbledon career record: 3-6 (3-2 in qualifying)
Wimbledon best result: Third round (2018)