Smashing any myths of an unlucky number with a 13th major singles title at Roland Garros, Dylan Alcott also dispelled the notion that his success is measured by numbers alone. 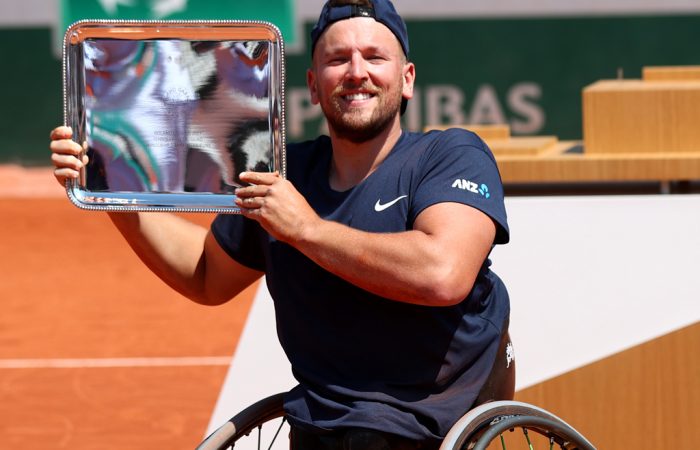 There was unquestionably elite company as Dylan Alcott lifted a third consecutive quad wheelchair singles trophy at Roland Garros. With a straight-sets victory achieved over Sam Schroder in the final, the Australian not only maintained a perfect singles record in Paris but could even boast a greater winning percentage than 13-time men’s singles champion Rafael Nadal.

“Well, that’s not bad,” a smiling Alcott agreed. “I haven’t lost at Roland Garros. He’s lost once or twice. Yeah, it’s incredible. I don’t think I’ll be winning 13, though.”

Alcott had, however, amassed an astonishing 13th Grand Slam singles title, adding to his seven Australian Opens, two US Open victories and the Wimbledon silverware collected when the inaugural quad wheelchair event was played at the All England Club in 2019.

“I am humbled and stoked that I’ve won 13 Grand Slams. Thirteen is my lucky number. It’s the number that I wore when I won a gold medal playing basketball,” Alcott pointed out.

With Wimbledon and the Paralympics approaching, there is every likelihood that Alcott will indeed add to a sporting CV that includes the gold and silver medals he claimed as a member of the men’s wheelchair basketball teams at the Beijing 2008 and London 2012 Paralympics.

While those are heady numbers, Alcott believes the ability to challenge perceptions is an even more powerful measure of success.

“When I was a young kid I really struggled with my disability, and when I realised that was my purpose, I got a lot better at tennis. I got a lot happier, and I can enjoy myself out there a lot more,” said Alcott.

“I realise that I don’t need Grand Slam wins to be able to do that purpose, but in saying that, that platform definitely helps…  if anybody watches and goes, ‘I thought wheelchair tennis would be bad; it’s really great.’ Or, ‘I didn’t know they could do that, or I’m going to give someone in a wheelchair a job next time or ask them on a date or I’m going to treat them with respect at a café’.

“Because they’ve seen people with a disability just being themselves, achieving things, that’s why I do what I do.”

Alcott does so knowing that professional competitive opportunities, particularly amid a pandemic, are not to be taken for granted.

“I love Roland Garros. I feel very lucky to be here at the moment with everything going on in the world,” he related after a tough final against 21-year-old Schroder, who led 4-2 in the first set before the Australian gained the upper hand.

“I just tried to remind myself when I’m out there of those moments and try and execute the way that I want to execute and have fun, to be honest.”

Alcott needed all that positive spirit as he contemplated an immediate schedule that included a trip to the Patrick Mouratoglou Academy in Nice, a tournament at Ile de Ré and a quarantine period in London ahead of his Wimbledon 2019 title defence.

There was also the prospect of a Golden Grand Slam – another Paralympic gold medal, combined with success at all four Slams. Alcott, however, was keeping expectations firmly in check.

“You can have a goal to win, but the only expectation you can have is to be the best version of you … all I can control is my attitude and what I do. And you know what? If I win the Golden Grand Slam, there will be tears running down my face and I’ll be that happy. But if I don’t, there will still be tears running down my face because I live the best life out of anybody I know.”