Ash Barty has advanced to the Italian Open singles quarterfinals for the first time in her career. 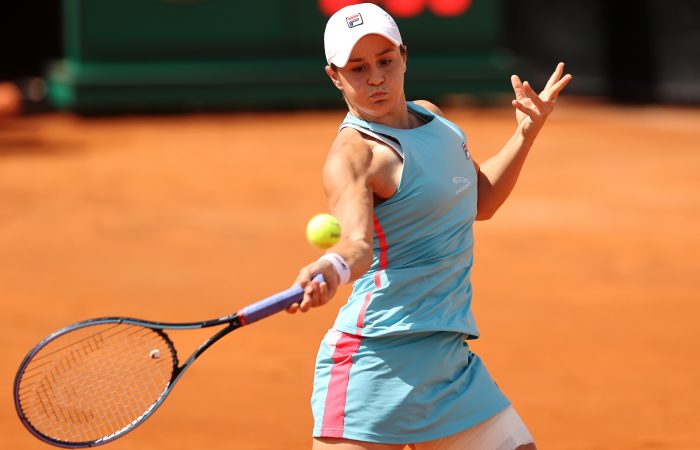 Seeds continue to tumble at this week’s Italian Open – but not Australia’s Ash Barty.

The top-seeded Barty scored a 6-3 6-3 victory against Russian Veronika Kudermetova in third-round action.

Barty was down an early break in the first set, but fought back in her first career-meeting against the world No.28.

Serving nine aces and saving six of seven break points in the 81-minute victory, world No.1 Barty proved too solid for Kudermetova.

Victory lap for 🇦🇺 @ashbarty as the fans are back in Rome 👋

The World No.1 is through to face Gauff in the @InteBNLdItalia quarterfinals! 🍿 pic.twitter.com/qtbKqMCHVf

Barty has now reached the quarterfinals in seven of the eight tournaments she has played so far this season, helping her build a tour-leading 27-4 win-loss record.

Barty, who has never previously advanced to the quarterfinals in Rome, plays American teen Coco Gauff next. It will be their first career meeting.

The 17-year-old Gauff upset world No.4 Aryna Sabalenka in the third round, denying a rematch of last week’s Madrid Open final.

“Coco has shown that she loves to bring her best tennis against the players that challenge her the most,” said Barty. “She’s played an exceptional tournament thus far. She’s got the ability to take the game on. She’s aggressive, she can run, she can trust her legs.

Only four top 20-ranked players remain in the women’s singles draw, which has been thrown wide open by a string of upset results in the early rounds.

John Peers is also through to the quarterfinals, teaming with New Zealand’s Michael Venus to record a 6-1 7-6(2) victory against third seeds and Australian Open champions Ivan Dodig and Filip Polasek.

It is the duo’s first quarterfinal of the season, where they will face German Kevin Krawietz and Romanian Horia Tecau.