Astra Sharma reflects on her WTA title breakthrough and reveals how Sam Stosur is inspiring her to become a clay-court threat. 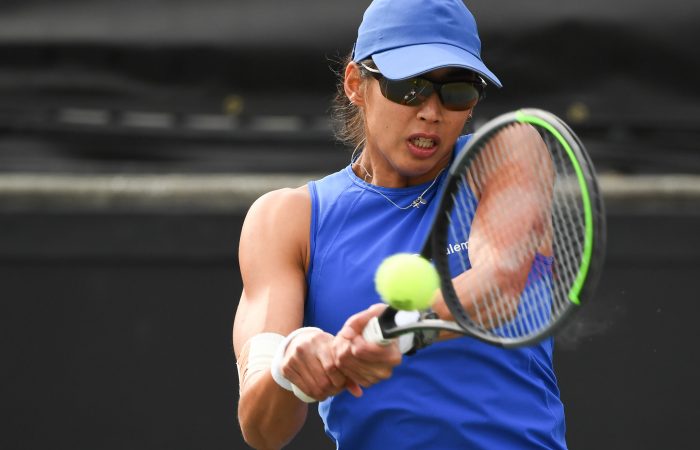 After winning her first WTA title on green clay in Charleston last week, Astra Sharma’s confidence is brimming for the tour’s clay-court swing.

The 25-year-old from Perth plans to compete in ITF events on clay in America in coming weeks, before heading to Europe to contest Roland Garros qualifying.

“I like hard court the best, but I do understand how clay does suit me really well with my heavy game, good kick serve and being a slower surface to get around and hit forehands,” Sharma told tennis.com.au.

“I’ve just grown up more on hard courts, so it is more comfortable. But I do know I’ve always performed quite well on clay.”

Sharma certainly impressed with her Charleston title breakthrough, where she claimed a career-first top-30 win against Tunisia’s Ons Jabeur in the final.

She defeated the world No.27 in a three-set battle, one where her physicality proved telling.

“I think I used that really well. It was something going into the tournament that I tried to work on with my coach. We were almost trying to emulate Sam Stosur a bit,” Sharma said.

First title feels 😀💪@astrasharma takes out the No.1 seed Jabeur in three sets to claim the title 🏆#MUSCHealthWomensOpen pic.twitter.com/9djVizOEe8

Stosur is one of the tour’s most accomplished players on clay, advancing to the Roland Garros semifinals on four occasions and was a finalist in 2010.

“When you practise with Sam, it’s like being hit with a hammer. Especially on the clay, where it showcases the physicality of the sport,” Sharma said. “That’s what we were trying to go for, to make points long and make them beat you, playing really aggressive with big margins and being able to have the confidence to say ‘hey I have a lot in the gas tank, at the end of the day I can play three sets like this’ and ask the questions of the other girls.”

Stosur’s coach and Australian great Rennae Stubbs was one of the first to congratulate Sharma on her title breakthrough.

@astrasharma has gone thru SO many tough loses over the past few years. She’s been so close to beating many good players & hasn’t quite gotten those wins. This is what u call perseverance! U got to keep working hard & keep staying positive & days like this happen! 1st @wta title

“To get that tweet from her was really nice. Aussie coaches and players usually stick together, but for her to do that, it really meant a lot,” Sharma said.

“Stubbsy has always been really nice and supportive of me. When we’ve been out on court together, she’s always given me really good tips. She’s had a wealth of experience and always been very generous with her time and helping me see things in a different way.”

Currently ranked No.120, Sharma is determined to keep improving. After admitting she had “a pretty rough start to the season”, she has newfound self-belief in her game.

“I lost a lot of three-set matches early on (in 2021). They were to good players, but it was still tough. I couldn’t quite get over the final hump,” she said.

“Having back-to-back-to-back consolidated performances (last week in Charleston) where I was playing at a consistently high level and being able to close out matches (was great for me). I was doing the right things over and over again, which gives me the confidence that I can do this – even against a top-30 player.”