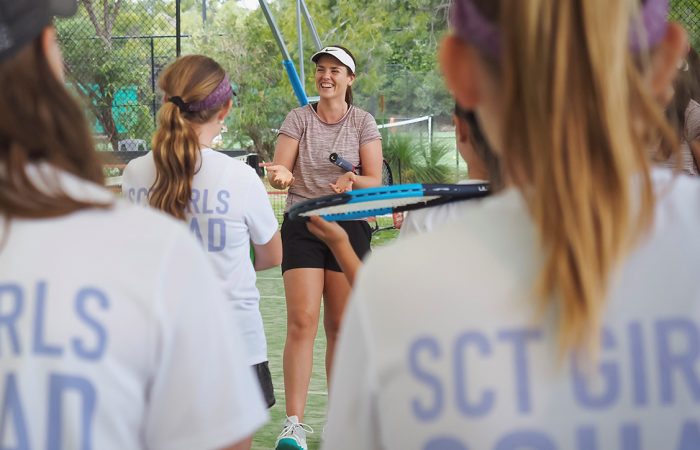 As one of three Scholarship Coaches in the Tennis Australia team, Emily Burns feels fortunate for the opportunity to learn more in 2021. Burns reflects on her tennis journey and biggest lessons so far as part of our TA Insider series …

My older siblings both played the game from a young age in Airlie Beach. I loved watching them compete at tournaments and wanted to be just like them, so I used to dress up in tennis clothes and begged until my parents let me begin my own tennis journey.

What are some highlights of your time in tennis?

Some of my greatest highlights have been from taking teams away, in particular the 13/u Queensland team for the Foundation Cup. We didn’t win the event, but we certainly made a great team. I also absolutely love seeing players achieve something they may not have thought they were capable of. From seeing the joy of a player learning to serve for the first time to winning a tournament, these are all great experiences to be part of as a coach.

You recently became a Scholarship Coach as part of Tennis Australia’s Females in Tennis initiative. What does this mean for you?

This role combines all of my favourite areas of tennis, so I feel incredibly grateful for this opportunity and absolutely love each day on and off court. Adam Carey and Brett Hunter have been so welcoming and open in sharing what they’ve learnt so far. Growth feels inevitable when you are surrounded by such an experienced and trusting team. I’m so excited to be in a position where I can also share all of the knowledge and tennis wisdom that is being passed on to the players that I am working with, and also my friends and colleagues.

Why is coaching a great career?

While there are elements of coaching that need to be followed by the book, there is also an abundance of freedom and imagination involved. It challenges me to keep an open mind to be able to best serve player needs.

Who are some of the coaches that have been most influential in your career?

One of my coaches growing up, Chris Steel, taught me the true meaning of being part of a team and the importance of adjusting to situations (which has been helpful off court as much as it was on). Another important lesson was if it is taking the player a long time to understand a concept, drill or technique, then it’s up to the coach to find a better way to communicate it rather than it being the player’s fault.
Andrew Ash has been incredibly influential in encouraging my growth as a coach and also taught me how to keep things simple. Brett Lennard has also been an amazing mentor. He has played such an important role in creating the belief within to go for an opportunity such as the Scholarship Coach role.

Who are the women who have most inspired you most in tennis?

Ana Ivanovic – I was, and continue to be, inspired by her kindness on and off court.
Andrea Buckeridge – I am inspired by her calm communication skills and ability to make people feel valued.
Deanna Penman – the energy she brings and her ability to present and engage large groups of people is infectious. I would love to be able to present in such a way myself.

What is some advice you’d share with other women considering a career in coaching?

If you would like to learn more in a certain area of tennis, ask someone who has more experience in that area and create time to observe them or be on court with them. I have found this to be incredibly beneficial in my learning and also a wonderful way to build connections within the tennis community.

What are some of the challenges you’ve overcome in your tennis career (both as a player and a coach)?

In my earlier playing career, I loved the game a little too much – so much so that when I dislocated my ulnar nerve, I took the time off really hard mentally. I felt as though my identity had completely vanished. Luckily I began to realise that every injury or illness that caused me to stop playing was actually my greatest teacher, and this helped me to play from a more holistic and sustainable mental state. After this period a win was amazing and a loss was still a frustrating – but I learnt, and now know, that it is an absolute privilege to be able to play and work in a sport that I absolutely love. Even during adversity, you practise elements that help on the court such as patience, presence and perseverance.

What’s a great day at work as a Scholarship Coach?

I absolutely love the team that I get to work alongside and also watching the players compete. So a great day at work involves watching and analysing matches, and discussing ways to enhance the training environment with my team.

How would you described your coaching philosophy?

My coaching philosophy is constantly evolving, however, one thing I always anchor in is on-court presence. I love to encourage players to become aware of their presence and also their opponents. I believe the energy you bring to training and matches is completely up to the individual. So it is my goal to teach players how to take control of their environment, rather than let their environment control them.

“How can we adjust?” It has been said that the definition of insanity is doing the same thing and expecting a different result. I love challenging the players to find ways to adjust to situations when they have noticed that their approach isn’t working.

“Some changes appear negative on the surface, but you will soon realise that space is being created in your life for something new to emerge.” I have found this Eckhart Tolle quote to be incredibly true on and off court. A few tough losses in a row can often feel like you’re heading in the wrong direction, however this in my experience has been the predecessor to immense growth. The key is to remain alert and look for the learning.

Adjust and keep it simple. Both of which I have had difficulty doing and have had to focus on. I am grateful for my coaches picking up on these deficiencies and allowing me to deepen my understanding through their teaching.

The tennis community! I have met so many incredible friends, mentors and role models in this sport. Also, tennis challenges me to ‘step into the area’ daily whether that be to compete in a match or coach. Presenting to a group of players didn’t come naturally, however I feel proud of pushing past the initial discomfort of putting myself out there. At times it feels like the sport is asking me to have courage, to continually show up and stay open to learn new ways of doing things.

Learning as much as possible from Adam Carey and the whole team at Tennis Australia. Adam has already had the pleasure of being stuck with me for an eight-hour car trip – safe to say, I asked a lot of questions and learnt a great deal. I have been overwhelmed with the kindness and team culture at Tennis Australia – everyone in the office has gone out of their way to learn my name and say a friendly hello each day. This has meant so much to me and I thoroughly look forward to getting to know everyone better as the year progresses.

> Nicole Pratt: “The vision is to create equality”