The recently-retired Jessica Moore is happily exploring a new pathway in tennis, taking on a Scholarship Coach role as part of Tennis Australia's Females in Tennis initiative. 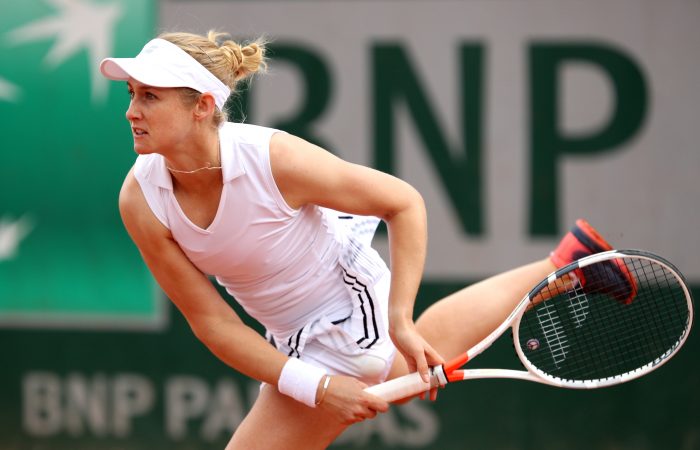 After ending her professional playing career at Australian Open 2020, Jessica Moore has turned her attention to developing her coaching skills. The former world No.52-ranked doubles player reflects on her new coaching role, as well as her biggest tennis lessons, in our TA Insider series …

Growing up with my older brother James who played a lot of sport, I naturally wanted to hang out and play whatever he did. The love for tennis really kicked off when we both went to a rural tennis camp during the school holidays, just outside my hometown in Boddington (Western Australia). I have great memories from my week there. The focus was tennis, but Bill Munday the head coach incorporated all sports and activities making it such a fun and inclusive experience. Very soon after, I started weekly lessons with Bill.

What are some highlights of your time in tennis?

My highlights include reaching the final of the Australian Open girls’ singles competition in 2008, winning two Junior Grand Slam doubles titles (Roland Garros 2008 and Wimbledon 2008), as well as representing Australia in Fed Cup and the Commonwealth Games in Delhi. Winning two WTA doubles titles later on in my career, where I was able to share those wins with Thailand’s Varatchaya Wongteanchai and Australian Monique Adamczak, were also special for me.
I also have to mention my send-off from Ash Barty at the Australian Open last January. It was completely unexpected and a moment I won’t forget anytime soon. Ash didn’t have to take the time that day, but I’m incredibly grateful.

You recently became a Scholarship Coach as part of Tennis Australia’s Females in Tennis initiative. What does this mean for you?

I see this role as an incredible opportunity to give back to the sport that has provided so much for me over the years. I’m grateful for the Females in Tennis initiative creating such a position and allowing more females to work in the high performance space at Tennis Australia. I’m in a position now where I can give back and pass on the knowledge I’ve learnt throughout my journey, whilst learning from some of the best coaches in the country.

Why is coaching a great career?

Coaching can be an extremely rewarding career. You’re assisting players in developing the skills to achieve their goals and dreams. Tennis can have such a positive impact on people’s lives, and I believe it is a coach’s role to guide that positive experience while continuing to challenge the boundaries.

Who are some of the coaches that have been most influential in your career?

I’ve been fortunate to work with a number of highly-regarded coaches over my career, who all played a part in influencing the player I was and the person I’ve become. After taking almost a year away from the game in 2011, I feel incredibly fortunate for the coaches who continued to believe in me and gave up so much of their personal time to help me get back playing on tour and for as long as I did – Rohan Fisher, Simon Rea, Shannon Nettle, Colin Ebelthite and of course my parents.

Who are the women who have most inspired in terms of tennis?

Ash Barty. I look up to Ash in a number of ways. Not only for her insane tennis ability, but also the way she goes about her business. I love the way she prioritises the people she loves and continues to have a consistent team around her, all whilst maintaining balance on and off the court. She takes complete ownership of her career. This was a real eye-opener for me as a player and something I’ll definitely take on into my coaching journey.

What is some advice you’d share to other women considering a career in coaching?

Back yourself and put yourself out there to be challenged – something I’m continuing to work on. I think as females we tend to put others first and play down our ability and impact. We can’t underestimate the power of female role models in tennis.

What are some of the challenges you’ve overcome in your tennis career (both as a player and a coach)?

Being from regional WA, with all my family there, proved to be a challenge. It meant I had to move interstate at a young age and after long trips, I was not always able to get home with the expense and logistics around travel. However, with this experience, I believe as a coach it makes me more understanding with players coming through with just how critical it is getting the balance of family, friends and schooling in and around tennis commitments.

What’s a great day at work as a Scholarship Coach?

Getting out on court with the athletes and seeing their reaction when they execute a skill they’ve been working on. I’m only a new coach, but when this happens it’s a rewarding feeling being able to share these moments.

How would you describe your coaching philosophy?

Creating an environment through trust and empowerment, which supports sustainable learning for the individual. Tennis is a sport that can provide skills for life and I believe it is the coach’s role to help create the best environment to do so.

There are no guarantees, but you can control your mind, your physical ability and your best effort. If you do this, at least you’re giving yourself the best chance and can live with no regrets.

For me it always came back to – simplify, play your brand and play for you. Always remember why you took up playing tennis in the beginning.

How it connects people. Tennis is a lifelong sport, with the ability of bringing people together from all walks of life whilst staying physically active. The people I’ve met through tennis over the last 20 years has been incredible.

A little more normality, as I’m sure everyone is. Seeing the kids being able to play regular events week in, week out. It’s been a long training slog for many athletes in 2020, so it would be great to see that hard work translated in matches.