Whether you’re a long-time player or new to the game, Cardio Tennis is a fun, fast and easy experience. Here’s everything you need to know to get started. 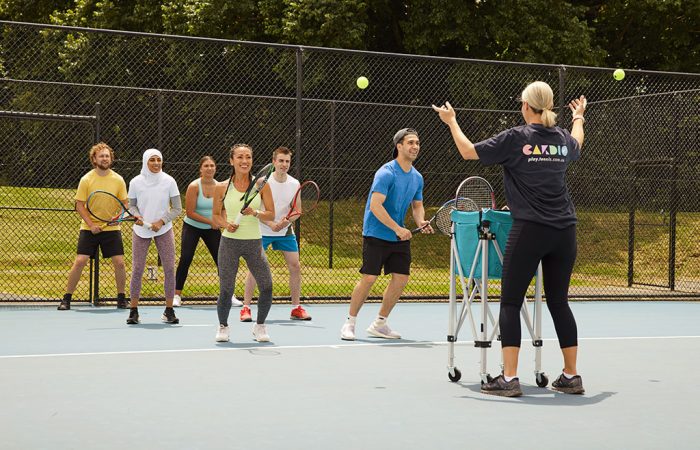 Tennis aficionados and novices alike are flocking to local courts to play Cardio Tennis. The 60-minute fitness class has been gaining popularity, and it’s easy to see why.

Suitable for any fitness level, with no tennis experience required, the fast-paced, music-filled class gets hearts pumping as qualified tennis coaches guide participants through a variety of drills, cardio bursts, endurance and agility exercises.

“The idea is that Cardio Tennis is for everybody, regardless of standard,” says Tina Keown, managing director at Victoria Tennis Academy.

“You can grab a group of friends and don’t need to have any background in playing tennis.”

All classes centre around tennis fundamentals, making it a great way for newcomers to the sport to experience a game – or for lapsed tennis players to ease back into it. You don’t even need to own a racquet.

“While we do focus on technical and tactical parts of the game, Cardio Tennis is very much about movement and fitness,” Keown adds. “A lot of our clients wear Fitbits and trackers, so they can actually track how many steps they do in a session,” she says. It’s estimated that participants can burn around 300-500 calories in a session.

Each club puts their own spin on how a class is designed. VTA also offers a variant called Cardio Plus, “for people who actively play traditional tennis on a regular basis,” Keown explains. “It means that you can get a little bit more rallying because there’s a slightly higher standard.” Classes here are capped at a maximum of eight participants.

On top of torching calories, it’s heck of a fun time.

“It’s a huge program for us here … the music’s always pumping,” enthuses Mat Garnham, director at Elsternwick Park Tennis Centre in Melbourne’s south-east. Last term, the centre ran 60 hours of Cardio Tennis a week, with over 300 people participating on a weekly basis.

“Anyone can walk in off the street and play tennis here,” Garnham says. “But we still want to have that club feel, where people don’t just come play their tennis and then leave again.

“We want to create an environment where people come, they play their tennis, and then they stick around, and they might have a drink. Sometimes we put a barbecue on.”

“It has a big community feel of people coming here and getting along – on and off the court.”

Everyone is welcome at Elsternwick Park, where players can develop firm friendships alongside their tennis. https://t.co/0Lh7Tpx2hY

Garnham notes that a significant jump in attendance occurred in the wake of COVID-19 and in the aftermath of Melbourne’s 112-day lockdown.

“It’s a physically distant sport people come and play, and they can still be 10 meters away from each other,” explains Garnharm of the classes, which operate with a maximum of 6 participants.

“A lot of people were obviously locked in their houses for months, not being able to do much. Since we started back towards the end of last year, it’s just exploded.”

Another great aspect of Cardio Tennis lies in its terrifically social nature. Garnham says many of the participants at Elsternwick Park have formed meaningful friendships through the class.

One of those people is Christy Vryonis, who’s been attending weekly Cardio Tennis classes at the centre since 2017. She got into it when a friend suggested the class as a fun way to exercise and get back into playing tennis after a long absence from the game.

Time was also a factor. “I don’t really have time to play tennis because all the comps are often on weekends and I do other sports,” explains Vryonis.

“Cardio Tennis is a way to access tennis, but in a quick, fun way.

“You’re still learning a skill, so you’re improving your tennis every time you do play,” she adds.

“Plus, it’s the social side. It’s been five years now, we’ve built up the most amazing group of friends.”

The friendship group has formed such a bond, they even go away on vacations together.

Vryonis is also a big fan of the centre’s Cardio Triples event, which takes place once a term on a Saturday night and sees up to 20 teams descend on Elsternwick Park for a festive evening of competitions.

“It’s become such an important part of the community,” Vryonis says. “You feel really part of something.”

Join in on the fun and find your nearest Cardio Tennis workout at cardiotennis.com.au