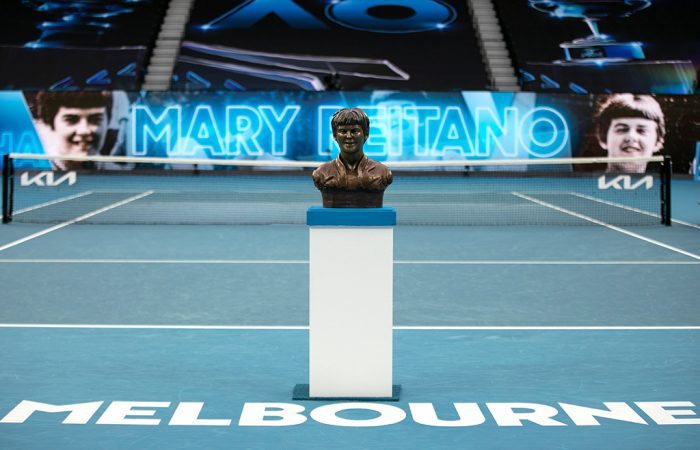 Mary Carter Reitano, who won three Grand Slam titles in the 1950s, has joined the pantheon of greats by being inducted into the Australian Tennis Hall of Fame.

The honour comes more than six decades after she won her second Australian singles title.

“I thought everyone had forgotten about me,” she said “so it is lovely to be remembered and honoured this way.”

Mary Carter was a prodigy winning the Australian junior title in 1951 and 1952.

She was essentially self-taught, having learnt to play by scrambling over a fence to use a neighbour’s court.

Her first Australian singles title came in 1956 at Milton Courts in Brisbane where she defeated veteran Thelma Long 9-7 in the third set of the final. The victory signalled a changing of the guard in Australian women’s tennis.

Her second title came four years later when she defeated Renee Schuurman of South Africa in straight sets at Memorial Drive in Adelaide.

The winner of the Australian singles championships in 1956 and 1959, Mary Carter Reitano is inducted into the Australian Tennis Hall of Fame, her bronze bust joining the ranks of Australia’s tennis greats in Garden Square.#AusOpen pic.twitter.com/fM0AwJbeRP

During her career Mary was dubbed ‘Little Miss Poker Face’ by the press because of her serious visage when she was on the court.

“It wasn’t really a poker face, I just didn’t show any emotion when I played.

“I liked the independence of the sport. If I did something wrong, I could blame myself because it was just me, a racquet and a ball.”

It was during her first title run that she created a moment of history by standing up to officials who she perceived were being disrespectful.

Her semifinal against Daphne Feeney was delayed because the men’s matches were dragging through five sets. Officials scheduled the women’s semifinal to be played on an outside court until Mary and Daphne refused.

“We decided to sit in the dressing room and wait until the men finished. Eventually we got our way and they set down the schedule for us to play on a show court the next morning. So that was a win for us.”

In 1961 Mary partnered a young Margaret Smith (later Court) and together they won the doubles title at the Australian Championships.

Aside from the Grand Slam titles, her career highlights came in 1955 and 1959 when selected in Australian teams to tour Europe and fulfil her ambition of playing in Paris and at Wimbledon.

COVID-19 restrictions prevented Mary Reitano from attending the ceremony on Rod Laver Arena, but her statue will join the others greats of Australian tennis on permanent display at Melbourne Park.